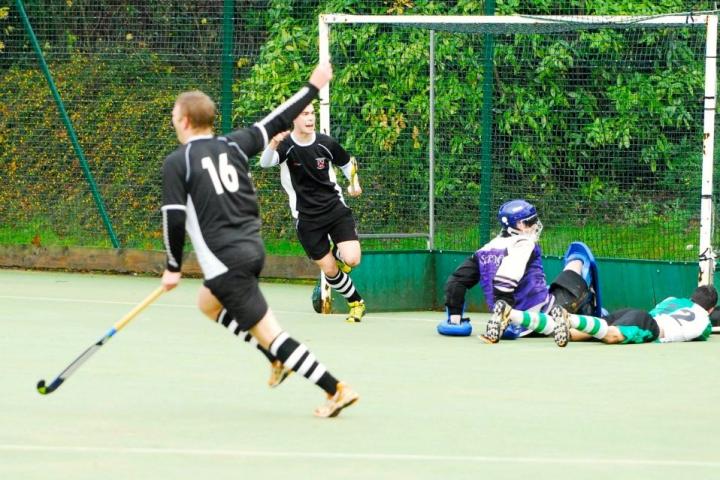 Alderley Edge became the in form team of the North Premier Hockey League with victory over Leeds Gryphons.

Starting brightly Alderley looked dangerous and had Leeds on the back foot going close through Gregory and Warburton. It was no surprise when Alderley took the lead, concerted pressure around the D lead to Simon Parr picking up a loose ball he held off several would be tacklers before finishing tidily.

Alderley were putting on a professional performance and before half time it was 2-0. Good work down the flank by Sam Gregory, who had the beating of his marker all game, found Adam Wildig who impressively flicked the ball into the roof of the net. Leeds came out strongly in the second half but Jackson was in good form regularly winning tackles and springing forward. Leeds main attacking source was being kept quiet by Hughes and they were unable to create any real opportunities. Alderley were soon back on top as Parr broke into the D firing a shot towards the back post where James Warburton was on hand to cleverly deflect the ball in.

Joe Coxon was giving the Leeds backline no rest and when he robbed the full back and set off towards the Leeds goal he chipped the ball up and hit a reverse stick volley which beat the keeper and Wildig deflected it over the line.

Leeds then had their best spell as they mounted several attacks but Cook and Badger were able to deal with most of what Leeds had to offer and Kay was having an outstanding game at right back. Eventually Leeds were generously awarded a penalty corner with 10 minutes to go, the initial shot hit the post and the rebound fell kindly for a straight forward finish.

Minutes later they then won a second penalty corner and Riley made his only save of the afternoon. Alderley nearly finished with a flourish as Coxon crossed to Wildig but with the chance of a hat-trick the finish escaped him. Alderley have climbed the table following 4 wins and a draw from the last 5 games, but have games in the next couple of weeks against tough opposition.

The second team travelled to promotion chasing Neston with a depleted squad and lost 4-0. They will look to bounce back next week against Wigan and still have hopes of a top 3 finish.

The 3s maintained their 7 point lead at the top of the league, beating Wilmslow 2s by 3 goals to 1. Alderley had the better of the game throughout with Andy Bryant impressing and grabbing a goal along with 2 from Louis Godfrey including one from a neat corner routine. A draw on Saturday against their nearest rivals, Oxton, will secure the title.

The fourth team are also still top of their division after beating bottom side Liverpool Sefton despite squandering several opportunities and finding the opposition 'keeper in good form, they still ran out 7-0 winners, the scorers were Richard Williams (2), Jon Wilding (2), Ben Hodkinson (2) and James Ireland. It is tight at the top with 4 teams separated by 4 points although Alderley and Denbigh have a game in hand, against each other.

Keeping up the high standards are the 5s who are also top after getting the better of Timperley 4-1, Chris Sinton (2), Ed Kennon and Fin Allenby grabbing the goals. They have a slender 1 point lead with four teams in the hunt for a top two finish.

The 6th team lost 3-1 to Wilmslow 3s and sit mid table, but could help the 5s with a good result next week and the 7s had a 1-0 win over Macclesfield 4s and are now in the top half.