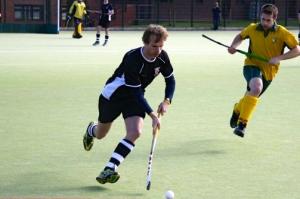 This week was a record breaker for Alderley Edge, with over 220 players representing the club on Saturday.

In addition to Andrew Jackson (England u18) and Helena Evans (England u16) a further two players are pressing for international honours, Callum Middleton who has missed a large part of the season through injury is now back and playing and has been called up to the England Boys u16 training squad with the next event this weekend and James Riley has been training with the England Masters squad, with the hope of selection for the World Cup later in the year.

The opening exchanges were fairly even with Doncaster pressuring the Alderley backline but Alderley able to counter. Ben and Sam Gregory combined to force the 'keeper into a tidy save and other half chances were not capitalised on. Whilst Doncaster had the territory advantage Alderley were holding firm with Mattingly and Joe Gregory solid in the middle.

Alderley took the lead mid way through the half when a spell of tidy passing released Sam Gregory down the right hand side, he outpaced his mark and broke into the D where his shot took a deflection off a Doncaster defender and flew into the net.

Alderley continued to give as good as they got albeit often playing inside their own half, which caused great frustration to their Yorkshire rivals. However, Doncaster were then awarded a penalty corner for a challenge inside the 23. The first corner was broken up illegally and from the second the Doncaster routine went a little awry. The ball landed in the path of an onrushing player and his slap at goal may have been heading over the backboard but deflected off an Alderley player and the goal was given. The rest of the half was played out with increased intensity, and Riley was called into action saving well at the foot of the post.

The second half started with Alderley looking to build from the back through Badger and Jackson but solid Doncaster defending reduced chances until Raj Kay found space down the right and made a long run from the back to fire in a cross into the D, the ball was partially cleared and fell to Frankie Bryant who dragged his shot wide of the post.

Doncaster then took the lead, when a mis-trap in the Alderley defensive line turned over possession and the forward produced an improvised finish to make it 2-1.

Only moments later another cheap turnover gave Doncaster the chance to shoot and again showed their class with another fine finish.

This had taken the wind out of Alderley's sails and it was 4-1, when Alderley surrendered possession in midfield and Doncaster showed good skill and composure to create a simple finish at the back post by an unmarked player.

Alderley then began to fight back with Hall and Hughes settling in midfield and Alderley still looking good out wide. Doncaster showed a professional approach and did not allow Alderley any clear cut opportunities and saw the game out.

The Men's 2s were left disappointed when their trip to Liverpool to take on Northern finished in a draw, Alderley had squandered several chances but lead 3-2, through Chris Ashton, Matt Hardy and a Chris Hardy penalty corner, until the last minute when the hosts grabbed an equaliser.

The 3rd team saw their lead at the top reduced to 5 points after they were held 1-1 by Mossley Hill, with Roland Alston on the score sheet.

The 4s are still top after a 4-2 win over Mossley Hill 2s, with Josh Towne scoring a hat-trick and Richard Williams grabbing the other.

The 5th team are in a 3 way race for the title and kept their hopes alive with a 2-1 win over Wilmslow.

The 6s lost pace at the top after losing 1-0 at Timperley.

A very youthful 7th team found the experience of the Bowdon team too much and went down 6-0.