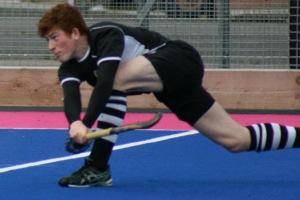 Following on from a couple of narrow defeats Alderley were looking for a positive result to set them on the right tracks approaching the halfway point of the season.

With Oxton averaging 4 goals a game and Alderley over 3 heading into the fixture a high scoring game was on the cards.

So it was a surprise when the teams went into half time scoreless, Oxton put a couple of penalty corners wide and had been looking for deflected finishes to no avail, where Alderley were unable to make the most of their forays into the opposition D.

The second half started more brightly for Oxton and when they created an overlap on the right hand side the full backs driven pass was neatly tipped in to give the visitors the lead.

It was soon two-nil when Kay was penalised for making a tackle near the baseline and the ball adjudged to be deliberately played off the pitch. From the resulting penalty corner the attacker started to dribble the ball then hit a rising reverse stick strike which would have cleared the backboard but clipped Riley in the Alderley goal and was therefore awarded.

Alderley stuck to the task in hand and Warburton had two glorious chances but his shots were straight at the 'keeper. Alderley also won a couple of penalty corners but the routines did not come off. As Oxton backed off the Alderley midfield of Bryant and Joe Gregory tried to set the pace and Hall and Hughes maintained good possession but no breakthrough came.

Alderley went to a longer ball game and tried to utilise the ariel route setting Sam Gregory free, this worked in patches putting the Oxton backline under pressure and eventually the pressure told with the award of another corner, this time the straight shot was chosen and Andrew Jackson's effort was too much for the keeper.

Alderley went all out for the equaliser with only minutes remaining and Mattingly and Coxon tried to link up in the final moments but to no avail and Oxton kept top spot.

The second team were left frustrated from their trip to Wigan in North Division Two, being held 2-2 by their hosts, Matt Hardy and Oli Wildig the goal scorers. With further players available for selection they will be looking to start closing the gap to the top teams.

The 3s faced second placed Oxton in what turned out to be a relatively even affair the difference being the quality of the finishing and Alderley ran out 4-2 winners, Rob Marks and Oli Kennon grabbing two each. This extends Alderley's lead to 8 points as Wilmslow and Chester both lost.

The 4s travelled to Bebbington and suffered a surprise defeat despite Chris Hall's brace, going down 4-2 and dropping out of the promotion spots.

The 5th team kept pace with the top two comfortably seeing off Macclesfield 3s 5-0, on target were Louis Godfrey, Tom Scott, Ali Smith (2) and goal of the game was finished by Greg Morton. The 6s went down to league leaders Bowdon 4-3. And the 7s in their first full season kept up their fine start with 4-1 victory away at Sale 4th team.