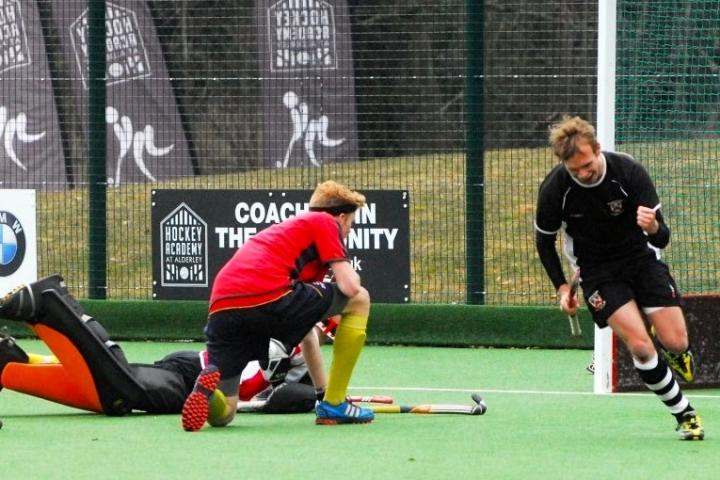 Alderley have shown great promise and delivered some great patches of play throughout the season so far but are struggling a little with consistency and so proved to be the case once again.

Alderley were having the better of the early exchanges and starting to get on top after a scrappy start when they were caught on the break and Leeds made the most of the opportunity after a 2 v 1 on the Alderley goal. Hughes was then sin-binned for breaking up play and Leeds tried to set siege on the Alderley goal, but created little.

Alderley fought their way back into the game and when a free hit was taken quickly it released Joe Gregory who fired in a pass into the D and picked out his brother Sam, who deflected the ball into the roof of the net.

The game was an open affair as Alderley looked good on the attack and more threatening with Leeds more fluid in the middle of the pitch. It was Alderley who deservedly took the lead in the second half as James Warburton was played in and as he rounded the 'keeper he was upended. Warburton brushed himself down and calmly slotted home the penalty stroke.

In a game that ebbed and flowed, it was Leeds who scored next. Alderley were unable to cut out a cross following a free hit in the corner and as the ball flew across the face of the goal it fell to the Leeds forward to score from close range at the back post.

The Alderley backline was tackling well and Cook broke up many fledgling attacks. The forwards were putting in their usual selfless shift and working hard. Possession in the middle was improved in the second half but Alderley were not able dominate as both teams played at a high pace. When Alderley were awarded their first penalty corner of the game Adam Wildig's initial effort was blacked by the 'keeper but the rebound fell kindly to Sam Gregory who lifted the ball into the unguarded net.

Leeds stepped up the intensity and put Alderley on the back foot, Badger was adjudged to be fairly tackled as he drove the ball out the D and in the resultant melee Leeds equalised with a reverse stick shot through a crowd of players.

Things started to go against Alderley and Leeds were awarded their first penalty corner of the game when from the top of the 'D' Hall was bizarrely adjudged to have deliberately played the ball off the backline and a tidy routine resulted in the ball being deflected into the goal.

Alderley were unable to get back in the game and Leeds created the better of the late chances with Riley saving well from another Leeds penalty corner routine. On another day Alderley would have stolen all three points, however it was a case of an opportunity missed.

The second team in North Division two lost pace with the leaders going down to second placed Neston. It was Neston who made the most of their chances and James Bateman was the busier of the two 'keepers but despite his performance and Laurence Barnes' penalty corner Alderley went down 4-1. They will hope to bounce back against bottom side Wigan next week.

The 3s were the toast of the club as they extended their phenomenal unbeaten run. They took on second placed Wilmslow 2s in what looked like being their toughest game so far, this did not turn out to be the case as Alderley turned on the style and breezed to their biggest win of the season 6-0, Rob Marks with 2, Andy Walker, Oli Kennon, Henry Holden and Will Hughes the scorers. Alderley are now five points clear and Wilmslow slip to fourth.

The 4s are in the hunt for top spot as they kept pace with the leaders after thrashing Liverpool Seton 3rd team 5-0. The 5th team are 3rd after drawing 1-1 with Timperley 5s and the 6th team are in sixth after losing to Wilmslow 3s who move up to 7th place.

Alderley Edge 7s moved up into the top half after putting 5 unanswered goals past Macclesfield 4s.