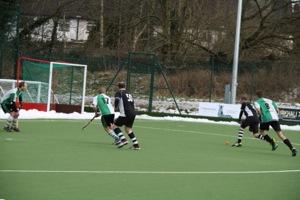 Despite the snow fall during the week and again on Friday night there was no stopping Alderley Edge Hockey Club. With approximately 25 volunteers clearing most of the pitch on Thursday night it was left to another 30 on Saturday morning to finish the job, meaning that Alderley Edge was able to get league games played - their amazing effort was further highlighted as this was the only pitch playable in the north of England.

On the pitch it certainly seemed the effort was worth it. Alderley Edge Men's 2nd team were first up. It was a clash between 2nd and 3rd in North West Division One as Didsbury Northern were the visitors.

In an open game Alderley took the lead when Sam Baker broke free and found himself one on one with the 'keeper despite not making the most of the first opportunity he reacted first to the loose ball before rounding the 'keeper at the second time of asking and scoring from the acutest of angles.

Didsbury were no pushovers and put Alderley under pressure and the experienced pairing of Hardy and Scarsbrook needed to be on their guard to thwart would be attacks. Pickering saved from a penalty corner and followed it up with another fine stop low to his right. Slightly against the run of play Alderley Edge went two nil up when Chris Hardy's penalty corner was saved and Oli Parker was quickest to react to calmly finish.

In the second half Alderley thought they had made it three when Frankie Bryant converted from a penalty corner, but the Umpire spotted an offence missed by all the players. Didsbury pulled a goal back and started to mount pressure on the Alderley backline.

Alderley playing more on the break had a glorious opportunity as Matt Hardy broke clear, drew the 'keeper but could not find the killer pass. Parker and Warburton were industrious out wide and put the Didsbury full backs under pressure. It was soon 3-1 as Alderley Edge slipped a penalty corner to Matt Hardy and his deflected strike found the back of the Didsbury net.

Didsbury were very quickly back in the match as they created a well worked second with a fine first time deflection. Didsbury grabbed an equaliser when a penalty corner was deflected in possibly off the body of the attacker although it was unclear and the goal was awarded.

Overall the result was probably a fair result although Alderley will see it as two points dropped. But it was enough to put them to the top of the table.

The third team made it an amazing 14 wins out of 14 with a hard fought 2-0 victory against Neston. Alderley took the lead through Brandon Few and thought they had stretched the lead when Godfrey's penalty corner strike was initially awarded but correctly overturned. Talbot saw yellow just before half time, but Alderley scored a second through Oli Wildig. Rory Savin impressed on his first game for the 3s. This extends their lead at the top to a whopping 18 points with a better goal difference by 45.

The other game held involved the Ladies 2nd team and they improved their promotion hopes with a 2-1 win over Chester with the goals coming from Sammie Mayall and Georgie Park.