Preparations for 2013 May Fair get under way 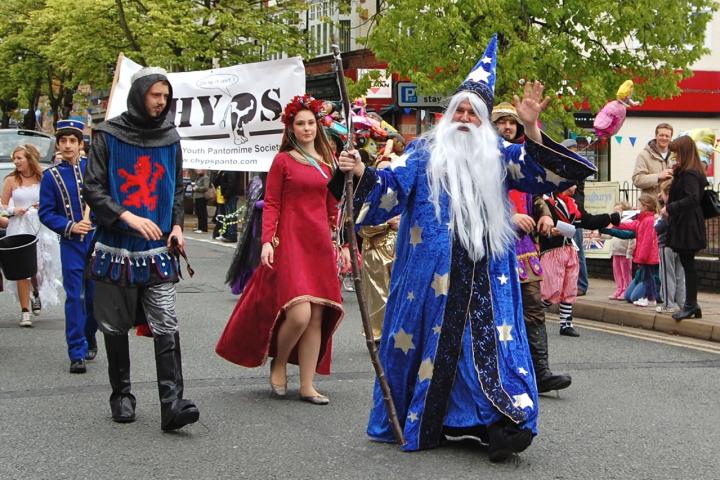 Despite concerns that this year's May Fair might be the last, we are delighted to confirm that plans for the 2013 Alderley May Fair are taking shape.

After the last fair, three months ago, Christine Munro, who organised both of the first two fairs, was not sure if she would carry on. She said "I was really exhausted, mostly because of the problems caused by Cheshire East and by Alderley Edge Parish Council, and I said at that time I couldn't face organising another event."

Since then though a number of things have helped Christine get her enthusiasm back and plans are well underway for the third Alderley Edge May Fair which will be held on Saturday 18th May 2013.

Christine explained "Of course just having time to recover helps! And I would be really sad to give up on the May Fair now, just as it is getting into its stride. When I started it I wanted to revive a tradition I remembered from my time as a small child in the village. And we seem to have had some success, entertaining hundreds if not thousands of local people in each of the last two years. It was also important that the Fair should be free, without any entry cost – and not add to people's council tax, for that matter!"

One of the factors that has helped change Christine's mind has been new commitment from Cheshire East.

She said "We've had some very positive discussions with Cheshire East who have accepted that they didn't give us the support we should have been able to expect this year, and they've made some good proposals for managing things better next year.

"The biggest thing that has changed my mind though has been the number of people encouraging me to carry on. That and the people who have come forward to form a new committee and share the load with me, which is really great."

The new committee is now well into planning for next year and starting to look at ideas for improving the May Fair. Paul Marshall is going to take on working with local schools to look at ways to increase their involvement with the May Fair, and Geoff Hall, who helped organise the parade this year, brings a lot of business experience to the committee.

He commented: "We're looking to introduce more formal management systems so that Christine can delegate more of the tasks. She really has done a fantastic job, which only someone on the inside could ever truly appreciate. But now it's time to spread the load."

Mike Taylorson has also joined the committee, taking over the task of fundraising. He said "It's very important to us that the May Fair is a true community event and that it's self-funding, without any load on the local taxpayer. That means that we depend on local support and our experience is that there is plenty of that.

"We circulate the minutes of our meetings to almost 50 people in a wide range of local organisations, as we believe it's important that they should all feel involved."

One of the new things the committee is looking at is applying for charitable status. Hugh Munro, who together with his partner Charlotte, has been involved from the start of the May Fair.

Hugh explained "The main focus of the May Fair has always been to deliver a lively and popular family day out, bringing people in for a fun day in the village. We're proud of the fact that this year we had 60 local traders, charities and other organisations involved, most based in and around Alderley Edge and all coming from within a 10 mile radius. But now we're looking to go one step further and generate a surplus to support local needs within the parish."

Christine Munro added "Everybody sees Alderley as a wealthy village but we know that there are people – especially the young and the old – who aren't always well catered for. And we think this could be a particular focus for the charity side of the May Fair. That way it won't just be a one-day a year event, but something that contributes for 365 days."

The launch meeting for the 2013 May Fair will be held at the Festival Hall on Tuesday 25th September at 7.30pm. Christine and the rest of the committee are keen to welcome anyone who is interested to come along to this meeting, whether they want to get involved or are just curious to learn more about the May Fair.

Melanie Connor
I am pleased to see that plans are underway for next years May Fair, and that you Christine have decided to continue to do it.
What I am at a loss about is how Alderley Edge Parish Council hinderered you.
If it was because we feel that local businesses should be more apart of it then, guilty as charged.That is not working against you, it is actually trying to make it more inclusive.
I am glad to see that you are taking that on board and are looking to have more local businesses involved. This can only be a good thing.
Surely it can't be the fact that through the Festival Hall we give you, Free of Charge, a room for your numerous committee meetings over the year. Is that a parish Council working against you - I didn't think so.
Very shocked & disappointed by the comment.

Geoff Hall
Both Councillors Connor and Herald should know what the problems were that the PC caused, because the May Fair Committee listed them in a letter sent to the PC more than two months ago. The PC has still not replied to this letter. This in contrast to the speed (less than two weeks) with which the PC leapt to uphold a complaint letter sent to them by one local trader out of the over 60 local organisations who supported the last May Fair. (More than three months later we have still not seen that letter either). The PC made no effort to find out why the local trader could not be included (for the record they were very late applying and we already had our hands full sorting out other problems, mostly caused by Cheshire East - who are now working with us much better).

We are mainly interested in discussion with the PC to ensure we have a proper level of support for next year, but as long as the PC refuses to engage in proper discussion with us (and alderleyedge.com, great as it is, is not the place to do it) then we will see them as unsupportive - and with good reason. The councillors are welcome to email me to set up an informal meeting on . So far the PC has ignored our repeated requests for such a meeting so it would be a very positive step if they did this.

Duncan Herald
Good Morning Geoff,
Just tell me what the problems were please; on here will at least put those problems before the public?
I agree with what I percieve you are saying i.e. let's move on and concentrate on next year (damn, I sound like a politician!).
Why not invite Parish Councilors to your next meeting; I've attended in the past and it is a much better way of facing any perceived problems, rather than writing letters?
I can't speak for my colleagues, but if a meeting 'tween you and me (in some convivial place!) would help, I'm up for that.

Geoff Hall
Hello Duncan,
Thanks for a quick and helpful reply to my earlier posting.
The Parish Councillors don't need any special invitation to our meeting on 25th Sept. It's a public meeting to which anyone is welcome to come - the more the merrier! What we don't want is for that meeting to be taken over by politicians (sorry!) or problems that should have been sorted out weeks ago.
We want to talk about plans for next year, get further ideas from those present and, if individuals want to get involved, talk about where we could use some help.
I would be delighted to meet - the sooner the better. Just email me at and we'll sort something out.