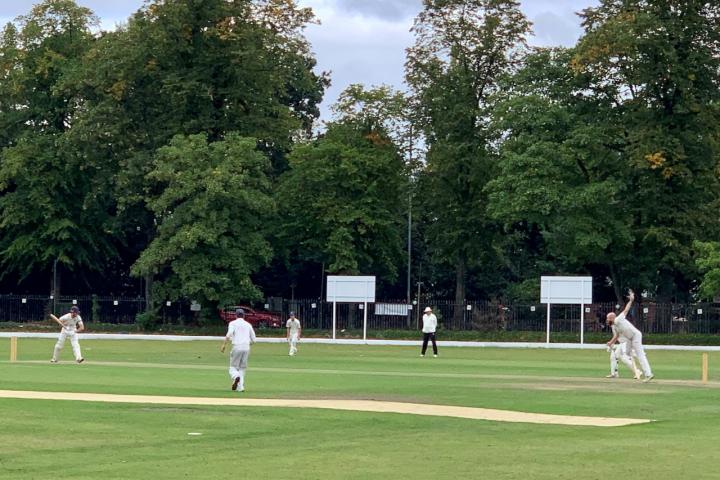 A 6-wicket defeat to Didsbury at Wilmslow Road on Saturday ended Alderley Edge First XI's title bid, handing the trophy to their hosts who secured their first Cheshire County Premier League title since 2001.

Didsbury won the toss and elected to bowl first with both openers making an immediate impact, Cheshire all-rounder Nick Anderson trapping Oli Kenyon lbw and Liam Booth claiming George Bell caught at slip to leave Alderley on 31-2. Opener Sam Perry hit 29, adding 30 for the third wicket in partnership with Tom Foreman to alleviate some of the early pressure, as Alderley's score climbed to 61 before Perry departed via a second slip catch for Didsbury's Australian overseas Noah Croes off Anderson.

Foreman continued through to a well-made 52, comprising 10 boundaries and a six, before Anderson sent his off stump cart-wheeling to claim his third wicket of the day and trigger an extraordinary collapse in Alderley's middle order as the visitors lost 5 wickets for the addition of no runs, falling disastrously from 103-4 to 103-8 with Anderson claiming a further three wickets to end with 6-53 from his 17 overs. Final pair Dan Fesmer and Andrew Windle kept the Didsbury attack at bay for a further 10 overs in adding 15 for the final wicket taking Alderley's score up to 123 before Windle edged to slip to give Cheshire spinner Steve Green impressive figures of 3-13 from 9 overs.

In reply Alderley's kiwi opener Jimmy Naylor claimed two quick wickets to set nerves jangling within the home dressing room as Croes and number 3 Marcus Fisher were dismissed to leave Didsbury on 29-2. Opener Tim Hughes continued to push the scoring pace as Didsbury reached 46 off just 13 overs before he too fell to Naylor to give Alderley's overseas his third wicket, but a fourth wicket partnership of 57 between Sam Leech and Anderson helped steer the hosts out of their early difficulty.

When Leech was bowled for 22 with just 21 runs required Anderson saw an opportunity to finish things quickly and completed his half century off just 36 balls securing victory, and the league title, with a flick for 6 over mid-wicket to spark celebrations in front of the Wilmslow Road pavilion. The defeat gave Alderley just 1 point from the fixture but Charlie Reid's side still retain a chance of finishing in second place but will be reliant on results elsewhere to secure runners-up spot.

In Second XI action at Moss Lane Jon Usher's team survived a tense final few overs to secure a draw against bottom side Bowdon which keeps Alderley 2 points above the relegation places heading into the final weekend of the season. Winning the toss and electing to bowl first Alderley gained the upper hand in the early stages reducing the visitors to 35-3, opener Ben Sheridan's 23 providing the bulk of the early scoring before a 110 run partnership between skipper Robert Shenkman, who scored 65, and Finlay Grosfils, who hit 63 powered Bowdon up to 188-8 from their 50 overs.

David Johnson led the Alderley attack with a solid spell of 4-43 from 10 overs. A 40-run opening stand between Calum Wilson (20) and Shabz Qasim (23) gave Alderley a strong start in their chase before three wickets for Ben Atkinson swung things in Bowdon's favour. A string of single figure scores in Alderley's middle order undermined any attempt to chase the total set as Alex Robinson (2-13) and Finlay Grosfile (3-48) piled the pressure on but a resilient 44 not out from number 5 Henry Stevinson kept the Bowdon attack at bay and in partnership with evergreen number 11 Mark Warnes the pair repelled the final 4 overs to take 5 points to Bowdon's 13.