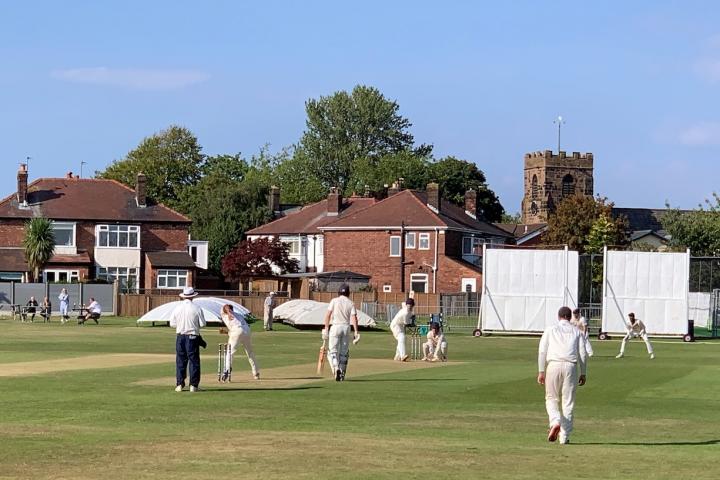 Alderley Edge First XI clinched victory in the final over of a tricky Cheshire County Premier League encounter away to Widnes on Saturday thanks chiefly to a fine hundred in the second innings from opener Ed Foster.

Winning the toss the hosts elected to bat first on a flat pitch at a ground which has seen scores regularly into the 260s throughout the season. Alderley started well with the ball however with Andrew Windle (2-39) removing Cheshire opener Ali Chughtai with only 11 on the board and with Richard Wilkinson claiming Aaron Soni and Windle following up to bowl number 3 Keiran Maher through the gate the hosts slipped to 49-3 as Alderley controlled the early part of the game.

James Naylor joined the attack and quickly claimed the wicket of Matt Burns thanks to a sharp slip catch from Foster which left Widnes on 68-4 before Luke McCoy and Chris Kirkby combined to put on 89 for the fifth wicket to pull the hosts out of trouble. The partnership was broken when McCoy was run out for 58 thanks to some sharp work in the covers by Charlie Reid combined with another tight spell of spin from Will Valentine who then went on to claim the wicket of Kirby, chipping to the waiting Naylor at midwicket to leave Widnes on 171-6.

A rapid 50 off 39 balls from Alex Hewitt helped push the hosts over the 200 mark and 20 from 22 balls from number 8 Rohan Luthra carried Widnes to 212-7 before 2 wickets for Dan Fesmer in a key 8 over spell at the end of the innings closed things out at 249-8 from the first 55 overs.

In reply Sam Perry and Ed Foster put on an opening stand of 127 for Alderley before Perry fell to Tom Evans for 57. Foster continued, providing the mainstay of the innings, as a number of Alderley batsmen partnered the opener contributing scores in the teens but with Widnes continuing to strike regularly the game remained nip and tuck until it reached a crunch moment when Foster was bowled by Qamar Hafiz to leave the visitors on 229-7.

With the game reaching a nail-biting crecendo Alderley still required 10 from the final two overs before Dan Fesmer proved to have the coolest head on the ground with a sumptuous cover drive for four off the second ball of the penultimate over to break the shackles. A spritely 13 from 16 balls from number 9 James Naylor helped the visitors continue to keep up with the asking rate before he was run out with 6 balls of the match remaining attempting a risky second run thanks to a fine throw from the boundary from Chugthai.

However, with three needed off the final over, Fesmer consolidated his boundary from the previous over with a late cut past the Widnes keeper to give Alderley victory by two wickets with 5 balls remaining. The win keeps Alderley in the hunt at the top of the table, still 17 points behind leaders Hyde with three games of the season remaining.

At Moss Lane on Saturday Alderley's Second XI suffered a five-wicket defeat to Sale who won the toss and elected to bowl first. Alderley began slowly with both Alan Day and Calum Wilson falling without scoring but 22 from opener Andrew Kennedy and Tejas Rao with 45 started the fight back for the hosts before 46 not out from Dil Yahathugoda took Alderley to their closing score of 154-7 from their 50 overs. Grant Whittaker took 3-43 to lead the Sale attack with Saad Khan contributing 2-20.

Sale's opening pair Amjad Khan (36) and Jared Moran (25) saw the visitors off to a steady start before 51 from Whittaker took them past the 100 mark. A great spell of 4-34 from Mark Warnes kept Alderley in the fight but 24 not out from number 6 Sonas Praveen was enough to take Sale to their target and claim the 25 points. Alderley took 6 points from the encounter to continue to creep away from the threat of relegation with Jon Usher's side now 20 points clear of Outlon Park who currently occupy second bottom spot.

On Sunday Alderley's Third XI took 6 points from a losing draw at Toft as the hosts racked up 251-4 after Alderley had won the toss and elected to bowl first. 113 from number three Simon Locke and 60 not out from veteran Nigel Muirhead provided the bulk of Toft's total with Alfie Usher taking 2-36 for Alderley. Usher then starred with the bat hitting 57 opening the batting with another 57 coming from number 5 Christian Smith but a haul of 4-47 from Muirhead stopped Alderley's reply short of their target with Stan Price and Jeremy Dunn holding fast with the bat to avoid defeat with the visitors closing on 202-8.

On Monday Alderley got the better of a drawn game at Sale that went right to the wire. Winning the toss Sale elected to bowl first making their way through Alderley's top order to leave the visitors on 54-4 before 60 from Andrew Kennedy and 31 from Chrisitan Smith in the middle order helped Alderley recover to reach 176-9 from their 45 overs, Ian Habbershon and Gareth Watterson each taking three wickets for Sale. In the second innings the visitors fought back well with the ball after Sale reached 126-3 before a crucial spell of 4-45 from skipper Ashray Bhamidipati pulled the rug out from under the Sale lower order and gave Alderley a chance of victory with Bhamidipati effecting a run out on the final ball of the game to prevent Sale reaching their target and giving Alderley 13 points to Sale's 8.