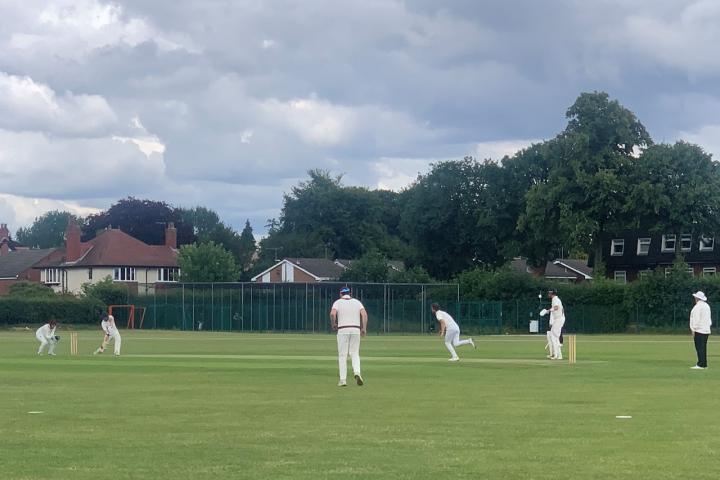 Alderley Edge First XI avoided any slip up in their latest league encounter at relegation-threatened Brooklands on Saturday registering their third win in a row as their Cheshire County Premier League campaign reached the half-way stage.

Winning the toss the home side elected to bowl first on a pitch showing some inconsistent bounce early in the contest which openers Ed Foster and Sam Perry countered with a steady opening partnership of 51. Perry battled through as Alderley slipped to 106-4 with 2-38 from Todd Walker undoing some of the visitors' early work, but the Alderley opener found an ally in Will Valentine who hit 38 from number 6 in a partnership of 68 to pull the Moss Laners out of the mire. Perry departed shortly after Valentine for another excellent knock of 93 that held the innings together and set a launchpad for skipper Charlie Reid to hit a quickfire 30 from just 14 balls as the visitors closed on 217-8 from their 55 overs, Joe Gill finishing with 3-51 for Brooklands.

Some dogged batting from the Brooklands top order saw them frustrate the Alderley bowlers in making their way to 68-1 before a double strike from Richard Wilkinson removed opener Todd Walker for 26 and number 3 Dominic Booth for 30 to leave the hosts on 86-3. Opposition skipper Kevin Carroll looked to be taking a liking to the spin of Charlie Reid, coming racing out of the blocks with 22 from just 13 balls before Reid had the last laugh trapping the Brooklands captain lbw in a crucial period of the game as the hosts fell to 113-5. Reid bowled in tandem with Jimmy Naylor, returning for his for his second spell, with the pair taking 4 wickets each to seal victory for Alderley, Naylor removing number 11 Rob Leach's off stump to close a frustrating final partnership of 29 that helped Brooklands amass 175 all out. Alderley claimed 25 points from the 42-run win to Brookland's 5 which marked the half-way stage of the league season.

On Thursday evening Alderley brushed aside the same opposition in the Twenty20 Quarter Final, extending their reign as T20 champions from last season. Winning the toss and bowling first, Alderley were relentless with the ball as Will Valentine (3-22), Andrew Windle (3-24) and Richard Wilkinson (2-12) blew away the visitors batting line up for just 82 with only Caleb Jones registering a score of note hitting 24 from number 7. Brooklands struck with the first ball of the second innings to initially put Alderley's reply on the back foot but 32 from George Bell and 35 not out from Richard Wilkinson saw the hosts cruise to an 8-wicket win in just 10.2 overs. The victory secured Alderley's place at the T20 Finals Day on the 17th July at Nantwich where they will play Hyde in the second semi-final of the day.

On Saturday, Alderley's Second XI scored a crucial victory over neighbours Cheadle at Moss Lane. After winning the toss and bowling, Alderley's attack responded by dismissing the visitors for just 151 with visiting captain Alex Read top-scoring with a battling 59 from number 6 and opener Moin Shah hitting 23, opener Ashray Bhamidipati taking 3-35 and Archie Vaughan 3-54 for the hosts. Read then claimed 2-31 with the ball in the second innings to keep the pressure on Alderley as the made their reply but a mature knock of 58 not out from youngster Liam Yahathugoda opening the batting saw Alderley to their target with 5 overs to spare for the loss of four wickets.