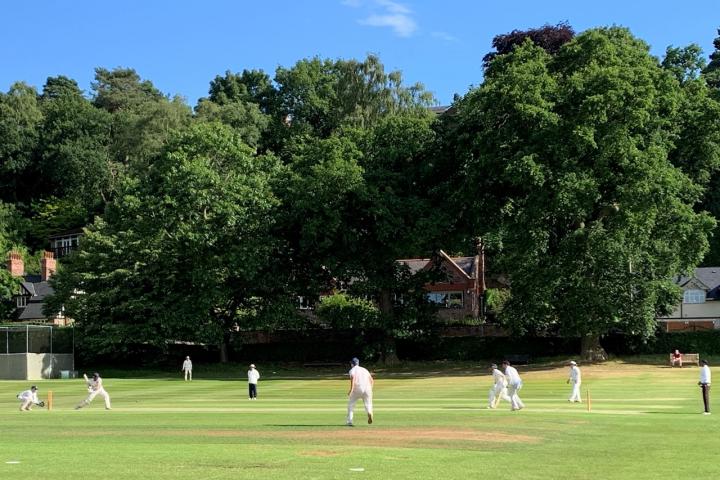 Alderley Edge First XI made it back to back wins in the Cheshire County Premier League on Saturday chasing down a big score at Moss Lane to take 25 points against a Didsbury side that started the day in second place in the table.

Winning the toss the visitors elected to bat first and started steadily in compiling an opening stand of 61. Ed Foster continued his purple patch with the ball claiming opener Tim Hughes for 42, quickly followed by Marcus Fish to leave Didsbury on 78-2.

Didsbury's number 4 Sam Leech hit a quickfire 90 off 87 balls to power the visitors past the 200 mark but Alderley fought back with the ball after the drinks break through Dan Fesmer's 3-45 and James Naylor's 2-64 in reducing Didsbury from 233-5 to 266 all out.

Didsbury struck early in the second innings with Nick Anderson claiming the wicket of Foster with the score on 20 but an 87-run partnership between Tom Foreman and Sam Perry for the second wicket steered Alderley out of trouble, Foreman hitting a string of boundaries in his 44 from 48 balls. Foreman became one of three wickets for Cheshire spinner Steve Green who carried the main threat for the visitors on a pitch offering turn in the second innings.

Opener Sam Perry provided the mainstay of the reply for Alderley hitting a flowing 91 before being bowled by Green having added 70 in partnership with Richard Wilkinson for the 4th wicket. Once again Wilkinson provided the perfect foil in the partnership with a watchful 61 but didn't let the spinners settle, launching Green for two towering sixes on to Mottram Road as Alderley stepped up the tempo of their chase.

Green had his revenge, claiming the all-rounder lbw which allowed Will Valentine to close things out for the home side with some early evening pyrotechnics hitting 36 not out from 32 balls, closing the contest with a hoisted six over the packed club marquee to seal a five wicket win for the hosts.

On Thursday evening Alderley advanced in the 1st XI Twenty20 competition defeating neighbours Cheadle Hulme by 24 runs at Grove Park in the round of sixteen stage. Winning the toss Alderley elected to bat first but struggled to gain much momentum with Richard Wilkinson's 84 from 59 balls (containing 5 4's and 5 6's) providing the lion's share of the visitors' total of 149, Niall Greenlees and Rhys Collister taking 2 wickets each for the home side.

In the second innings economical bowling from Dan Fesmer (3-30), James Naylor (2-19) and Charlie Reid (2-23) was enough to see Alderley close the hosts' total on 125-8 with only opener Humayun Khalid (34) and number 9 Alex Read (28) registering a double figure score. Alderley will now play fellow Premier League side Brooklands in the Quarter Finals.

On Saturday Alderley's Second XI lost a tight encounter with Bowden, going down by 24 runs at South Downs Road. Winning the toss Alderley chose to bowl first with Bowden's Ben Sheridan and Zach Thompson both hitting half centuries in progressing the hosts to 116-1. Alderley battled back through veteran Mark Warnes who claimed 5-39 and Ben Chapman and David Johnson who took two wickets apiece as Bowden lost regular wickets to slip from their strong start losing their last 6 wickets for 38 runs to finish on 179 all out.

A burst of 5-74 from Bowdon seamer Hal Dwobeng in the second innings left Alderley's reply in tatters at 55-5. A composed 56 from wicketkeeper Christian Smith kept Alderley in the hunt but 2 wickets each for Haydn George and Shardul Viinoday blew away the Alderley lower order to close their innings in the 43rd over with the score on 155.

On Sunday Alderley's Third XI comfortably chased a big total from Toft in an 8-wicket win at Moss Lane. Winning the toss the visitors batted first and amassed 224-8 from their 45 overs on the back of 140 from opener Archie Phillips, Stan Price with 3-14 and Josh Chalk's 3-33 the pick of the attack for the hosts. In reply Alderley cruised to their target with 8 overs to spare with Tejas Rao's unbeaten 89, 53 from Sam Woolf and 44 not out from Henry Stevinson giving Alderley the 25 points.