Cricket: Alderley on a roll after brutal dismantling of Bowdon 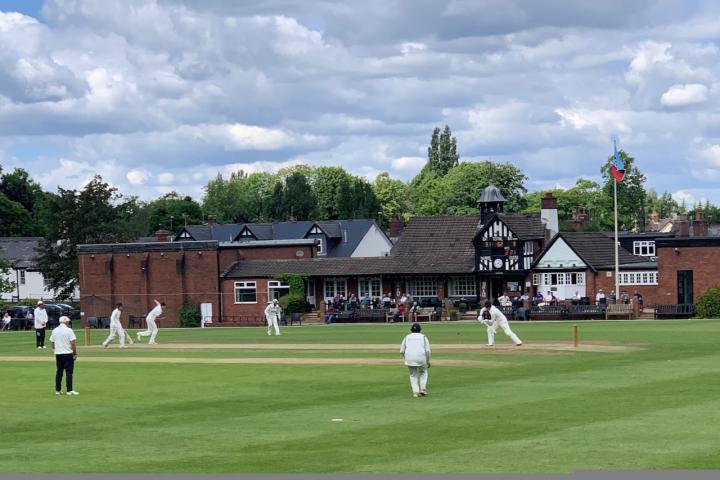 Alderley Edge First XI made it four wins on the bounce on Saturday with a 168-run rout of local rivals Bowdon in the Cheshire County Premier League.

Winning the toss, the visitors elected to bowl first at Moss Lane in good bowling conditions, Alderley's top order playing watchfully in making their way to 81-3 before a superb partnership of 119 for the fourth wicket between opener Ed Foster and Richard Wilkinson began to push the home side to an over-par score on a surface providing plenty of help for the bowlers.

Sharp running and clever manipulation of the field started off the partnership to be followed later by some lusty blows as the pair took advantage of the momentum being built. Wilkinson departed first with the score on 200 having hit seven 4's and three 6's in making 67 before Foster fell five runs later for 95 (nine 4's, two 6's) just 5 short of what would have been a richly deserved hundred.

Foster's dismissal gave Bowden seamer Rob Lord one of four wickets from his 17 overs before a quickfire 17 not out from 9 balls from skipper Charlie Reid helped the hosts close their innings on a high registering 227-6 from their 55 overs.

In the second innings Bowden were given little chance to get their reply up and running as openers Jimmy Naylor and Andrew Windle ran amok with the new ball to reduce the visitors to 21-7, Naylor taking 4-20 from 10 overs, Windle 3-19 from the same allocation including 4 maidens.

Opener Jack Tipton stood firm facing 55 balls in hitting 12 as wickets fell around him before becoming one of two wickets for Charlie Reid, Richard Wilkinson wrapping up proceedings in the 26th over after late hitting from number 9 Joe Chapple (15) and number 10 Oliver Simons (14) had pushed Bowden's score beyond the 50 mark, their innings finally curtailed with just 59 on the board. The 25 points gained lifted Alderley into second place in the league with six games of the season played.

Alderley's Second XI fought to take a share of the points against a strong Chester Boughton Hall side who racked up 274-1 after winning the toss and electing to bat first on a typically flat surface at their Filkins Lane ground, openers Luke Ramsay (134) and Matthew Griffiths (121 n.o.) both registering centuries.

The rapid rate of scoring allowed the hosts to declare with 7 overs of their innings left giving Alderley 57 to bat in reply. Chester's varied attack stopped Alderley from mounting a serious challenge to their total but scores of 41 from opener Liam Yahathugoda and number 5 Shabz Qasim ensured the visitors gave a good account of themselves in the second innings with 30 not out from skipper Jon Usher marshalling the lower order through the closing overs to finish on 175-7 taking 4 points to Chester's 14.

On Sunday Alderley's Third XI registered a 6 wicket win away at Marple, Alfie Usher starring with the ball in claiming 4-12 to dismiss the home side for 128 with Sam Woolf picking up 3-19 in support. In the second innings Alderley opener Andrew Kennedy carried his bat for 85 not out whilst steering a youthful side through to their victory target for the loss of 4 wickets to seal back-to-back wins.