Cricket: Alderley make it three in a row with big win at Hyde 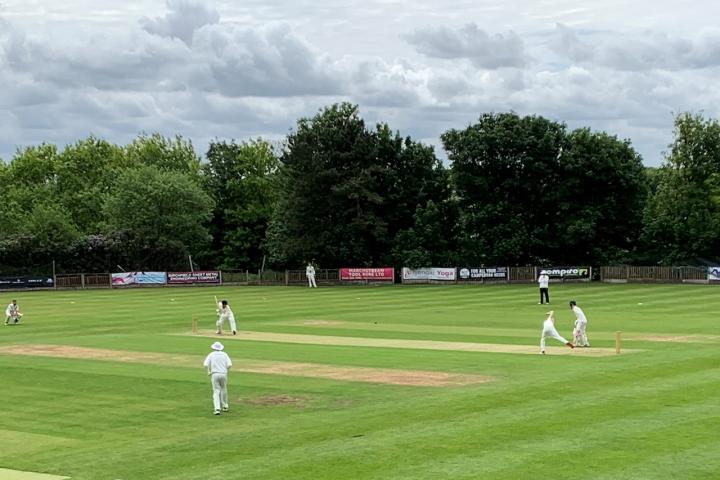 Alderley Edge First XI secured a third win in a row on Saturday with an 89-run victory over Hyde at Werneth Low lifting them into third place in the Cheshire County Premier League.

Losing the toss, Alderley were asked to bat first on a green-tinged pitch under grey skies but battled hard in bowler-friendly conditions to reach 46-2 in the early stages.

Opener Ed Foster hit 43 to lay a platform for Alderley's innings joining in a 59-run partnership for the 3rd wicket with George Bell, the pair taking a particular liking to the spin of opposition skipper Danny Cranmer who was deposited for a flurry of boundaries as the pair went on the attack.

Young spinner Charlie Barnard fought back for the hosts with an excellent spell of 6-42 from 17 overs to peg back the visitors with Alderley's middle and lower order removed for a string of single figure scores. Bell continued unperturbed, combining clever placement with brutal hitting to complete a sublime hundred before becoming Alderley's last wicket to fall with the score on 181 in the 45th over.

Economical bowling and tight fielding are quickly becoming hallmarks of Alderley's play this season as openers James Naylor and Andrew Windle took advantage of continued seamer friendly conditions picking up a wicket each and forcing a run-out, which Naylor effected, with scoring opportunities severely restricted for Hyde's top order leaving them on 21-3.

Former Alderley man Adam Worrall survived a few tough chances early in his innings to put on 55 for the 4th wicket with Rohan Acharya as Hyde's middle order strived to repair the damage. Worrall's fall to Ed Foster for a plucky 34 put Hyde on 76-4 and triggered an extraordinary period in the match with Acharya (25) falling shortly after to Charlie Reid before Foster collected the final 5 wickets for just 3 runs to finish with the incredible figures of 6 wickets for 5 runs from 7.5 overs including 4 maidens which left the home side all out for 92 and Alderley with the maximum 25 points.

Alderley's Second XI secured a draw in the reverse fixture at Moss Lane taking 7 points to Hyde's 13. After being asked to bat first, Hyde opener Haider Hussain notched 76 in taking Hyde past 200 before a rapid fire 54 from 24 balls (five 6's; three 4's) from wicketkeeper Sri Nath allowed the visitors to declare with an over of their innings remaining with the score on 225-6, David Johnson taking 3-69 and Katie Haszeldine 2-43 for Alderley.

Opener Ashray Bhamidipati continued his good early season form with the bat hitting 75 to give Alderley a strong start in their chase before falling with the score on 124-1. Dil Yahathugoda picked up the baton in striking 67 from number 3 to take the hosts to 187-5 but with Hyde hitting back with the ball to take regular wickets through Alderley's middle order captain Jon Usher saw out the remaining overs with Johnson to ensure the hosts took a share of the points.

On Sunday Alderley's Third XI also secured 25 points in an impressive 127-run win against Romiley at Moss Lane. The hosts racked up 223-6 after being asked to bat first, opener Liam Yahathugoda leading the way with 67, his first senior half-century, supported by 43 from Miles Mason and 39 from Jonny Usher.

Yahathugoda then starred with the ball to pick up his maiden senior 5-for in taking 5-29 as the visitors were dismissed for 96, only number 5 Paul Flattley coming to terms with the Alderley attack in making 39 not out.