It will take 400 years to repair Cheshire East's road network 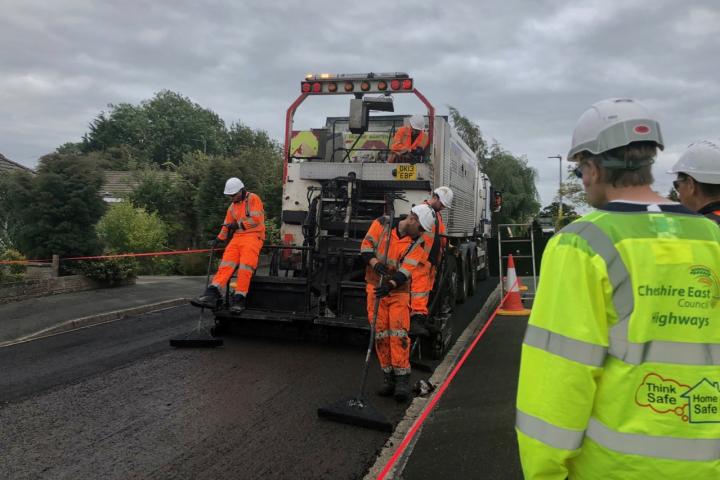 Last week members of the Highways and Transport Committee considered a report on the work done to date and the proposals for implementing the recommendations of the Highway Service Improvement Plan.

During the meeting on Tuesday, 21st September, the chair of the committee informed members that it would take 400 years to repair Cheshire East's road network if investment from government continues at the current level.

During the last financial year the Council's Highways Service received 33,287 new service requests and the National Highway and Transport (NHT) survey indicated the level of customer satisfaction with the Highway Service is 46%.

He said "What is needed to actually maintain the present poor level, we need about £30 million a year."

Adding "If we're only getting £15 million, and £19 million last year, the poor state of our roads is only going to get worse and worse so government is going to have to address this."

"If we do want, and everyone does, an improvement in our roads we can only get it if we get a fair grant from government to do that."

Councillor Craig Browne, Chair of Highways and Transport Committee, responded "The funding of the highways service by central government simply is inadequate and we need to be honest."

"It is incumbent on all of us to lobby our MPS, to lobby government. We're responsible as a highways authority for about 1700 miles of carriageway and using the government's calculation formula the replacement cost of that 1700 miles is about £6 billion. This year as we've heard we've received £15 million from the DFT towards the maintenance of that network.

"Now the mathematicians among you will recognise that that £15 million represents a quarter of the 1% of the £6 billion that's needed to replace the network. Or to put it another way, at the current levels of investment it will take 400 years to repair the whole of our network. Now that's a sobering thought, but it represents the reality of the situation we face.

"So yes, we should and are trying, to do everything we can in terms of implementing the recommendations of the highways improvement plan but if the money isn't there to back it, the on the ground improvements that our all our residents expect to follow will not actually take place."

Vice chair of the committee, Councillor Laura Crane proposed that the Chair of the Committee writes on behalf of the council to the DFT, putting forward their concerns over the funding shortfalls and seeking additional funding, which members supported unanimously.

David Carey
When current HS2 completion costs are set to go well over £100 billion pounds or three times its original cost, and the present buidling cost per mile at £307 million pounds, its no suprise this goverment dont want to invest the required money into fixing roads. So our elected MP's want the vast majority of people in the country to suffer by using a car on dilipated roads while the priveleged few who can afford to travel by HS2 gloat how much time they have saved by using the train every now and again. What it does do it put the figures quoted above into some form of perspective.

Alan Brough
Why are Cheshire East's roads so much worse than other council areas?

Vince Chadwick
David Carey, we need HS2, AND we need our roads fixing. It isn’t one or the other. Your understanding of the reasons behind HS2 however, seem from your post to be somewhat flawed. Hardly surprising as it has been badly misrepresented in the media.

HS2 is not about speed, but about capacity, most of which on East Coast and West Coast main lines and the Midland main line is currently gobbled up by fast non-stop trains between London, the Midlands, and the north, and very useful they are (Euston to Wilmslow in 1 hour 47 minutes is pretty good!). But 125mph non-stop trains on a crowded mixed-use railway take up a vast percentage of the available capacity (everything else - get out of the way!).

Move those long distance fast trains onto a separate infrastructure, and the capacity released on the classic lines would be enormous. This would not only be beneficial for places that currently see trains whizz past but never stopping since there isn't the capacity for many stopping trains at present, but rail freight, which is hopelessly capacity-constrained, would be able to flourish and we could shift meaningful amounts of freight off the motorways and onto rail. Near here, the Mid Cheshire line through Knutsford has just an hourly service, so crowded at peak times that passengers get left behind. A half hourly service was promised several years ago and indeed is enshrined in the operating contract, but has not happened because there are no train paths to spare between Stockport and Manchester. A similar situation at Stoke means the much needed but mothballed Leek to Stoke line cannot be re-opened. HS2 will solve problems like these and many others. Even passengers as far from HS2 as Aberystwyth and Pwllheli will benefit from more train paths at Birmingham for Welsh services.

Our Victorian forefathers who built the present railway infrastructure (yes it really is that old! And has been 'extended' as far as it can be for modern use) were men of vision. maybe we need some of that vision now.

Demand for people and goods to travel is only going to increase (the covid-induced reduction in passenger numbers is already reversing), so if we don’t build HS2, what is the alternative? More motorways? That would be an environmental disaster with constant noise and about 6 times the land-take and about 100 times the atmospheric pollution of a quiet 2-track electric railway. The new Lower Thames Crossing motorway is taking almost as much ancient woodland as the whole of HS2. There’s nothing like a motorway for gobbling green areas and replacing it with constant noise and foul air pollution – where are the media protests against that project?

The projected costs of HS2 have been vastly inflated by contingency on contingency and will be nothing like the figures the press likes to scare us with. Just get on and build it, in its entirety. A railway system without high speed lines is like a road system with no motorways. We have some catching up to do.

And fix our roads as well (they only got like they are through neglect).

Stewart Dyer
Thanks Vince. That is a very interesting post, and certainly provided me with new information.

Gary Thomas
Thanks Vince. That's essentially the arguments that the transport planners of Manchester, Birmingham, Sheffield and Leeds have been making. Without HS2 they are capacity constrained and will find it difficult to increase or improve current levels of service with the existing infrastructure.

Tony Haluradivth
Alan Brough raises a very good point. It is certainly noticeable (having just returned from a lovely week in Shropshire with it's less crumbly roads) and even the roads in Cheshire West are more superior to ours.

David Carey
Just got a copy of ‘Tatton Matters through my door from our local Tatton MP Esther McVey.
Page 3 has the headline ‘Esther urges the Prime Minister to grant a second vote and scrap HS2’, a very interesting article indeed.