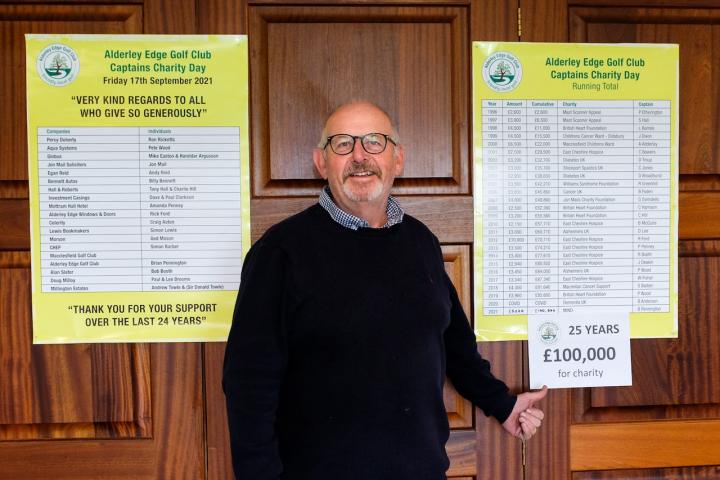 A Captain's Charity Golf Day, run by Brian Foden has taken place at Alderley Edge Golf Club for 25 years and this year reached its amazing target of
raising £100,000.

Brian spoke at the Golf Day meal and auction that evening about the charity golf events he has run during that time, making a very emotional speech.

He said "I just started the event in June 1996 after my mother died that March. She had used the 'Mast Scanner' at Macclesfield Hospital and we wanted to raise funds in her memory. I was only going to organise the one event, but everybody told me that I should carry on with this fundraising for different charities. And so the golf event carried on for the next 25 years.

"Over the years we have raised money for at least 15 charities, which are listed on the poster shown in the photograph, and finished in 2021 by supporting this year's Captain's Charity - Stockport MIND.

A credit to our community!

David Carey
Well done Brian and to everybody who helped and also contributed to a fantastic amount of money going to charity. keep up the great work.....

Roy West
Congratulations to all involved at Alderley Edge Golf Club for raising such an amount. It is a good example of what can be achieved by local clubs with some positive attitude.