Cricket: Fifth place finish for Alderley after triumph over Timperley 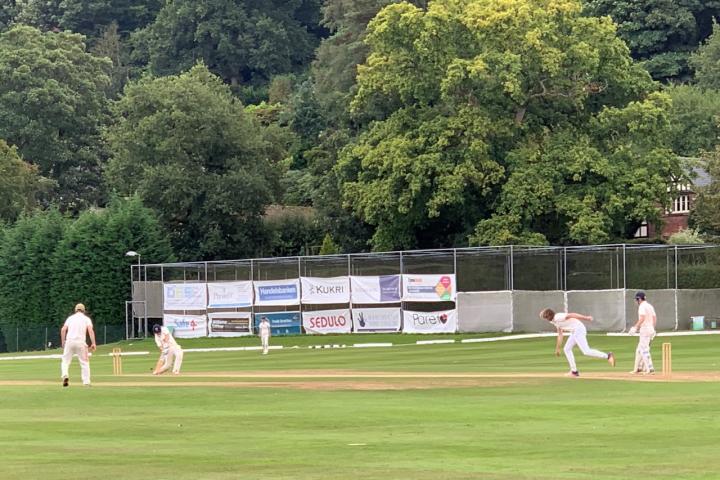 Alderley Edge First XI narrowly missed out on a top 4 finish in the Cheshire Premier League on Saturday, finishing 1 point behind fourth-placed Oulton Park after securing a 25-point win against Timperley at Moss Lane.

Winning the toss Timperley, whose relegation from the top division was confirmed the previous weekend, chose to bat first but were soon in trouble at 6-3 as new ball pair Chris Sanders (2-25) and Andrew Windle (1-31) both made an impact. Timperley rebuilt to 68-4 before Will Valentine removed Abhishek Kulkarni for 24 but number 5 Jamie Matthews was proving harder to shift.

A 54-run partnership between Matthews and Chris McCarthy provided the bulk of Timperley's innings, Matthews' determined knock lasting 129 balls in top-scoring for the visitors with 62 before mis-timing a sweep off Charlie Reid to be caught in the deep. McCarthy became the seventh wicket to fall with the score on 159, dismissed via an excellent leg-side stumping from Ed Foster for 49 off Alan Day as Alderley's spinners began to turn the screw on the visitors' lower order, Day claiming 4-41 with Reid bagging 2-44 as the pair mopped up Timperley's tail to close on 175.

Ed Foster and Sam Perry put on 68 for the first wicket as Alderley's reply started strongly, Foster the first to go for 38 before Perry departed for 45 following a 50-run partnership with Tom Foreman for the second wicket. Perry's score left him just short of 1,000 runs for the season, and the league's highest run scorer, in a mightily impressive season with the bat.

A cluster of wickets followed Perry's departure with Foreman lbw for 32 and Will Valentine becoming Chris McCarthy's second wicket (2-37) to leave the hosts on 129-4 as Timperley battled back and when Charlie Reid was dismissed at 142-5 the visitors sensed the chance for an upset. However, a composed 21 not out from number 4 Ed Fluck and a typically brutal 16 from 14 balls from Chris Sanders, including a straight six to take the hosts to their target, meant Alderley finished their final game with a five-wicket victory with 20 overs of the innings to spare.

Alderley's Second XI secured sixth place in the Second XI Premier Division following their match on Saturday, representing a huge turnaround from the first half of the season where they occupied the relegation spots for several weeks. Jon Usher's side made short work of Macclesfield at Victoria Road, winning the toss and bowling the hosts out for just 82 inside 23 overs, Henry Scanlon taking 4-58 and David Johnson claiming 3-6 for Alderley with only opener Chris France, hitting 31, showing any resistance for the home side. Alderley breezed to the required total in just 17 overs on the back of Pete Lydon's 42 not out to secure victory by 6 wickets, a result which saw the hosts relegated in the process.