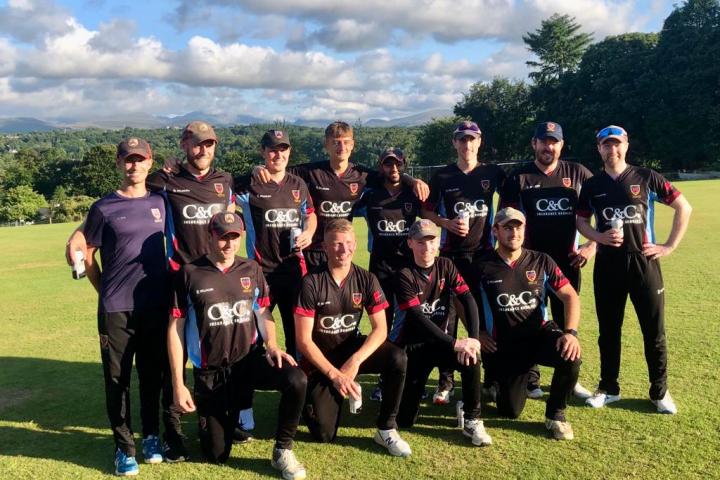 Alderley Edge First XI's success in the T20 format continued on Sunday at the picturesque Menai Bridge Cricket Club in North Wales where they beat fellow T20 league champions from the North West area to qualify for the last 8 of the national competition.

Playing against the hosts in the first semi-final of the day Alderley lost the toss and were put in the field first, responding strongly with the ball to reduce the North Wales champions to 39-6 on the back of Charlie Reid's 4-21. Menai's number 4 Robbie Jones led the fightback with some lusty blows to finish on 53 not out from 48 balls but with little support from the rest of their line-up the home side closed on 106-7 from their 20 overs.

Alderley came out of the blocks quickly with Sam Perry striking 14 from just 6 balls to set them on their way and a 70 run partnership for the second wicket between Ed Foster, who hit 28, and Tom Foreman's 42 from 34 balls taking the game away from Menai's attack with Alderley completing their chase comfortably for the loss of 4 wickets with 6 overs to spare.

Skipper Chris Sanders' 16 from 11 balls and Will Valentine hitting 14 from 13 balls lifted the Cheshire champions up to 129-6 from their 20 overs, Steve Cheetham and Matt Wilkes taking 2 wickets apiece for Clifton. Clifton controlled things in the early part of the second innings moving to 70-1 on the back of a 54 run partnership between ex-Lancashire man Gareth Cross and Luke Perry before Cross was well caught in the deep by Charlie Reid becoming one of two wickets for spinner Will Valentine.

Alderley's control with the ball and commitment in the field began to tell with the required run rate climbing quickly on top of a crucial spell from Ed Foster (2 wickets for 8 runs) reducing the Manchester side to 89-5 before a final burst from Sanders (2-25) left Clifton 20 runs short of their target closing on 109-7. Alderley now progress to the Northern Regional Finals Day in Derbyshire on the 15th August.

Sunday's celebrations marked a swift turnaround from a losing draw away at neighbours Cheadle in the Cheshire County Premier League with Alderley fielding a team shorn of several regular members through injury and COVID isolation which gave the opportunity for Katie Haszeldine to create a bit of history as the first female to play for the club's First XI.

Alderley won the toss and elected to bowl first on a green pitch with a couple of wickets for Dan Fesmer reducing the hosts to 41-2. Cheadle's middle order repaired some of the early damage to lift the hosts to 124-5 with skipper Dan Brown hitting 28 and Subhaan Mahmood 25, both caught behind by stand-in wicketkeeper Ed Foster who claimed three victims in a good day behind the stumps.

Two quick wickets for Will Valentine reduced Cheadle further to 145-8 but 36 from number 8 Kris Ali helped the hosts to finish with a flourish before he was well held in the deep by Dan Fesmer to give Charlie Reid a five wicket haul dismissing Cheadle for 182 in the 52nd over.

Alderley's opening pair of Sam Perry and Ed Foster added 51 for the first wicket before Perry departed for 30, one of four wickets to fall to spinner Josh Dooler who quickly reduced the visitors to 83-4 with Foster the fourth man to fall departing for 30. Chris Sanders picked up the baton and began to lift Alderley out of trouble, striking three maximums on his way to 34 before being caught behind off Dan Brown via an excellent diving catch from wicketkeeper Elliot Bullock.

At 133-6 Alderley's tail was unable to wag sufficiently to trouble Cheadle's total with final pair Ben Lambert and Katie Haszeldine holding out for a draw with Alderley closing on 155-9.

Alderley's Second XI fared similarly in their match against the same opposition at Moss Lane after winning the toss and electing to bowl first, Cheadle starting strongly in reaching 97-1 with opener Nick Reid compiling 46 and number 3 Dan Adams hitting 51 from just 35 balls.

Adam Dooler's 36 from number 4 pushed Cheadle on to 139-2 before returning veteran Mark Warnes began to make an impact on the game taking a couple of quick wickets to reduce Cheadle to 166-5 finishing with excellent figures of 4-46 from 15 overs. Solid contributions from the visitor's lower order helped Cheadle to close on 208-8 with David Johnson collecting 3-48 for the hosts.

Things started poorly for Alderley in the second innings with Cheadle's opening pair of Adam Rodgers (2-29) and Mark Hampson (4-19) removing the hosts upper order to leave them on 15-4. Andrew Kennedy and Ashray Bhamdipati steadied the ship somewhat in taking the home side to 47 before both fell in quick succession, Bhamdidpati for 25.

Blair Campbell's 23 from number 7 helped Alderley's total into three figures putting on 49 for the 8th wicket with Josh Chalk who top scored with 29 but when the pair were both dismissed with the score on 104 it was left to Johnson and Warnes to see out a combined 55 balls to secure a draw for the hosts.

On Sunday Alderley's Third XI faired better with the bat, racking up 234-5 away at Romiley but also had to settle for a draw after failing to bowl out the hosts who finished on 140-8, Alderley taking 14 points from the contest to Romiley's 6.