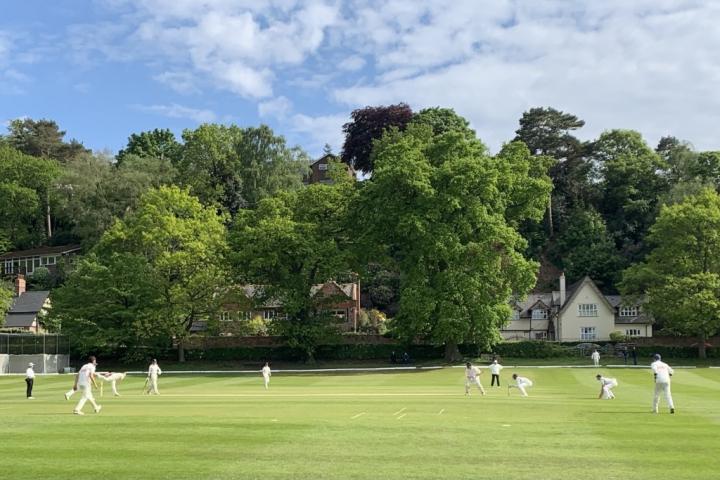 Alderley Edge First XI continued their recent good form at Moss Lane on Saturday with an impressive 6 wicket win over Chester Boughton Hall who had started the day at the top of the Cheshire County Premier League table.

Winning the toss, skipper Charlie Reid decided to bowl first with opening pair Chris Sanders and Richard Wilkinson snaring a wicket apiece to leave Chester reeling at 0-2. Warren Goodwin and captain Harry Kiloran steadied the ship to take the visitors to 45-2 but after a brief interlude for rain Wilkinson returned to dismiss both, claiming 3-35.

A miserly 8 over spell of 2-19 from Ed Foster put Chester deeper in trouble at 50-6 but a knock of 53 by number 7 Ashraf Qureshi and a composed 61 from Cheshire spinner Jack Williams, batting at 8, added 117 for the 7th wicket to bring some respectability to the visitors' scorecard and briefly put the home side on the back foot. Charlie Reid introduced himself to the attack to dismiss both caught behind, taking 3-26, as he and Alan Day swept up the lower order to close Chester's innings on 177 with 3 overs of the first innings to spare.

A classy 85 from Alderley opener Sam Perry broke the back of the chase in the second innings, though at 45-2 Chester were still in the game with dangerous spin duo Williams and Kiloran operating in tandem. Perry and Ed Fluck managed both well in compiling a 93 run partnership for the third wicket, forcing Chester to continually shuffle their bowlers in the search for a breakthrough, before Fluck was adjudged lbw for 32. Perry was dismissed with 21 still required for victory but George Bell ensured the hosts cruised to their target, finishing with 24 not out to give Alderley a maximum 25 points win.

Alderley's Second XI endured a tough trip to Chester as they were bowled out for 99 at Filkins Lane having won the toss and elected to bat. A battling knock of 32 from skipper Jonny Usher batting at number 9 was the only innings of note from Alderley's line up as Alex Townend blew the visitors away with a spell of 5-32, supported by Sam Mallows and Dan Riley who claimed two wickets each. Chester reached their target comfortably in the 21st over of the second innings for the loss of 3 wickets on the back of Andrew Metcalf's 43 at number 3 with Alderley taking just a point from the match.

On Sunday Alderley's Third XI fell to current league champions Didsbury at Moss Lane who won the toss and compiled an imposing 217-6 off 42 overs putting them in a position to declare their innings early on the back of 70 from number 4 Andy Mashiter and 59 from number 3, captain Tom Bidwell. Henry Scanlon took 3-32 and Katie Haszeldine 3-41 with the ball for Alderley. 33 from opener Andrew Kennedy and 53 from Scanlon, batting at number 4, were the bright spots for the hosts in the second innings but a spell of 4-60 from leg spinner Rab Nawaz prevented Alderley from building any significant partnerships to threaten the visitors' total with the home side eventually falling short by 53 runs.