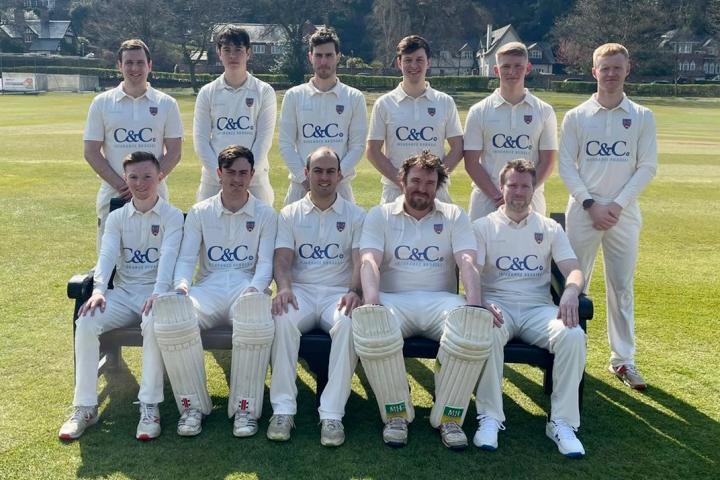 Alderley Edge CC First XI got their Cheshire County Premier League season underway on Saturday with a 25 point victory over Hyde at Moss Lane. Alderley suffered the early loss of Alan Day after winning the toss and electing to bat first, but a second wicket stand of 160 between Ed Foster and Sam Perry swung the early momentum in the home side's favour. Perry was eventually dismissed for 78, one of three wickets for ex-Alderley seamer Jake Hill, as Hyde fought back taking regular wickets through Alderley's middle order. With Foster cruelly run-out for 92 the game was evening up as the hosts slipped from 170-2 to 193-5. A quickfire 25 off 12 balls from George Bell helped Alderley's innings end with some impetus as they closed on a competitive 239-8 off 55 overs.

An early blitz from Alderley's new-ball pair of Chris Sanders and Richard Wilkinson left the visitors' reply in tatters at 21-4. Ex-Cheshire captain James Duffy steadied things for a time with a defiant 24 and youngster Noah Cole showed good composure to notch 31 in the middle order but at 91-6 the game looked to be there for the taking for Alderley. Hyde number 7 Adam Worrall was proving to be the thorn in the host's side, compiling a partnership of 49 with Ben Balderson for the 6th wicket before Richard Wilkinson returned to the attack, taking two wickets in two balls to seal a well deserved five wicket haul. With Worral in free-flowing mood Hyde's score began to creep up to 191 with three overs of the day remaining before Chris Sanders returned to claim the key wicket, his third of the game, trapping Worral lbw for 73 to seal victory for the hosts by a margin of 48 runs.

In the reverse fixture at Werneth Low Alderley's Second XI fell agonisingly short of victory in a high scoring run chase, registering a losing draw. After winning the toss and electing to bat first, Hyde's top order piled on the runs reaching 245-6 off their 50 overs, opener Dave Leighton notching 50 and number three James Chew top scoring with 69. Dan Fesmer was the pick of the Alderley attack taking 2-36 with George Valentine and David Johnson also claiming 2 wickets apiece. A fine knock of 87 from Alderley's number four Will Valentine and 54 from Shabz Qasim on debut kept Alderley on track to overhaul the host's total but with two runs required off the final ball to seal victory a mix-up resulting in the run out of Fesmer left Alderley just short of their target despite a strong showing in the first outing of the season.

On Sunday Alderley's Third XI comprehensively beat Ashton on Mersey in an early season Twenty20 fixture. Winning the toss and batting first Alderley compiled a strong 150-2 off the back of opener Calum Wilson's 54, fellow opener Ashray Bhamidipati's hitting 34. The host's response never really got going as regular wickets from George Valentine (3-11), Will Chalk (2-7) and Charlie Boddy (2-14) ensured Alderley stayed in control restricting Ashton to 73-9 in reply, sealing victory by 77 runs.