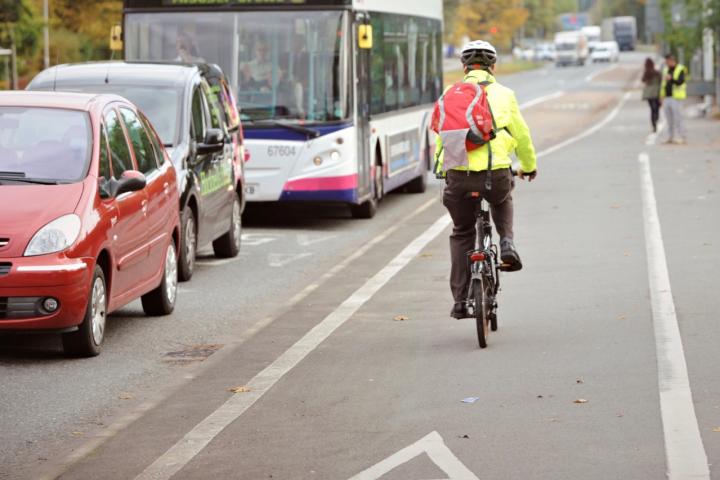 Cheshire East Council has taken another step in its drive to reduce emissions from cars and get more people walking or cycling to boost health and wellbeing.

The council intends to introduce cycling and walking infrastructure plans with proposed dedicated active travel routes across four towns in the borough.

Crewe, Macclesfield, Wilmslow and Congleton are the first towns to benefit from a walking and cycling infrastructure plan, which could attract government investment.

Following a review, these towns were considered to have the greatest potential for increased walking and cycling. Each town could see a network of segregated cycling and walking routes linking key locations, such as bus and train stations, leisure centres, shops and employment sites.

In Wilmslow work is already scheduled for a new walking and cycling designated route from the train station, through the town centre to the high school, Royal London campus and Alderley Park. Other measures are also proposed.

In Crewe, where seven potential routes have been identified, a new green link along the Mill Street corridor would offer off-road cycling and walking routes to and from the town centre and train station.

Rood Hill, Mill Street, Antrobus Street and the town centre are some parts of Congleton, identified as potential locations for similar schemes, while in Macclesfield, a variety of improvements are proposed, creating or upgrading cycling and walking-friendly routes linking Middlewood Way, Hurdsfield industrial park, Waters Green, Sunderland Street and Cumberland Street, together with public realm improvements at the train station.

Council deputy leader Craig Browne, cabinet member with responsibility for strategic transport, said: "There is every indication that councils that have these plans in place are more likely to receive central government funding in future years.

"These improvements take account of the numbers of people cycling and walking in Cheshire East and how we can increase these numbers through a wider infrastructure strategy. There will be extensive public consultation before any schemes are implemented."

The council's cycling strategy, adopted in 2017, outlines the target to double the number of people cycling once per week for any purpose by 2027. The Department for Transport says councils should develop local plans to increase the number of people walking or cycling to work, for education or other reasons.

Councillor Jill Rhodes, Cheshire East Council cabinet member for public health, said: "The health benefits from walking and cycling are obvious. We know that good health is important to people in Cheshire East and we are generally a healthy borough.

"Physical activity improves mental health as well as physical wellbeing, reducing the risks of poor health and morbidity as well as improving the air that we breathe, through reduced emissions."

Cheshire East Council is committed to becoming a carbon neutral authority by 2025 and is encouraging all businesses, residents and organisations in the borough to reduce their carbon footprint in whatever way they can.

The plans for each town will be published on the council's website.

Duncan Herald
Its a good job that Cheshire East is not 'hard up'.

Tony Haluradivth
And they have the temerity to tell us that there is barely any money left for road repairs. Well Sam Corcoran and your virtue signalling Greenie /Monbiot pals.... cyclists USE THE ROADS and the roads are appalling full of potholes

David Smith
Is that cyclist in the photograph going the wrong way down the cycle path?

David Alexander Connor
This is all very worthy but the council really must address the concerns of lots of rate payers.

When we talk about the state of the roads in our area, we are not making it up!
I have mentioned countless times the stretch of Knutsford Road approaching the mini roundabout just before Chorley.

This is riddled with pot holes and if any cyclist hits one of those then there could be a serious accident.

Cheshire East........ please listen to what we are saying!

Cheshire East Council received, from the Dept for Transport, just under £17m this year for highways maintenance (a figure which has been cut by £4m in 2021/22); this had to cover pothole repairs, carriageway patching, road resurfacing, footpath repairs, gully emptying, winter gritting, verge maintenance, traffic signals, road signage and street sweeping.

To put this figure into some kind of context, over the course of the last year it has helped to pay for about 80 roads across the borough to benefit from carriageway patching (within Alderley Edge these have included Moss Road, Trafford Road and Moss Lane) and about a further 10 roads to benefit from full resurfacing - clearly the money does not go very far.

The Dept for Transport has made clear that those local authorities with Local Cycling & Walking Infrastructure Plans (LCWIPs) will be better placed to bid for additional funding in future. This is why it makes sense for Cheshire East to develop LCWIPs as referred to in the article above.

I would like to offer some reassurance that of the £17m allocated for highways maintenance this year, none has been diverted to fund cycling schemes; rather, these are funded from a separate pot of money, provided by central government, which the council has to bid for. As always, it is a competitive process, which is why it is essential to have a plan in place.

Along with the other Parish Councillors, I continue to report potholes across the village on a regular basis, including on the approach to Chorley.

Mark Russell
Craig. As the deputy leader of the council can you not pick up the phone and get things done? Do you really have to report potholes through a web site like the rest of us? It’s like saying the deputy head of a school can not tell kids off and has to complain via email to the head.

Simon Lundy
There are a lot of anti-cyclists around and I think part of the problem is the image.. a MAMIL is not a good look and should require a permit. Im a cyclist but I dont ride two abreast inflaming car drivers and I dont wear gear to look like a plonka. I also love cars and have had to get rid of the sports car as the wheels were getting wrecked all the time
So both issues need addressing. Pot holes, and room for cyclists.

Jon Williams
Well said Simon, the state of the roads is damaging cars, bikes and bike riders when they come off - come on C/E get a grip.