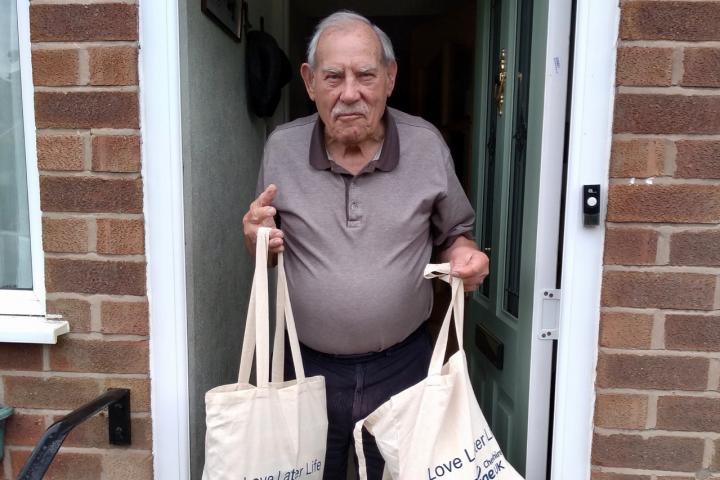 Vulnerable older people in Cheshire East are being supported through the pandemic by the local branch of Age UK which has handed out hundreds of welfare packs to older people who have been impacted by social isolation due to the pandemic.

The packs, which contain essential items, small treats like chocolate or sweets and activities such as jigsaws or quizzes to keep their mind active, have been given to some of the most vulnerable people in the community.

They were funded by PCC David Keane who provided two grants totaling £6,000 from his Safer Communities Fund to ensure these vulnerable people were supported.

The funding has also paid for the development of scam awareness advice leaflets for older people who aren't online.

Damon Taylor, chief executive of Age UK Cheshire East, added: "This funding has had a positive impact on many hundreds of older people in Cheshire East.

"The welfare packs were targeted at those who we felt were most in need of such a 'pick up'. They were very well received with one older person saying they were extremely touched by the pack and it has brought tears to their eyes.

"Thanks to the funding, we have also been able to share scams awareness messages with a wider audience and we believe that this has had a positive impact on older people's confidence, making them less susceptible to becoming victims of crime.

"In terms of the positive impact our project is making, to date, 94 per cent of those attending scams awareness sessions reported an increase in their confidence against scams."

PCC David Keane said: "With many older people having to shield or stay indoors to protect themselves from Covid-19, we have unfortunately seen an increase in social isolation in our communities.

"Charities like Age UK do a fantastic job to ensure older people remain connected and have the support they need to help them through this challenging time.

"This funding has not only helped put a smile on the face of an older person, it's also ensured they are made aware of the latest scams to reduce their risk of becoming a victim of crime."

Grants are available for projects which are working alongside Cheshire police and local authorities to support vulnerable people in the community.

Click here for more information about how you can apply for a Safer Communities express grant.

Simon Lundy
Following on from this...I was wondering if anyone would be up for volunteering to help some of these old folk. These emergency food parcels are great but I think some of them would really welcome a bit of interaction with the outside world. As part of my day job I know some of these people don't speak to anyone from one month to the next, irrespective of covid. I had to see an old man recently; I played his piano for 5 minutes, made him some tea and it clearly made his day – the tea that is. So I was just wondering if anyone would be up for getting a little group together and helping them out in this way, be it taking their dog for a walk, picking something up from the chemist for them, or just having a chat over the doorstep with a flask. It could make a huge difference to these people. So if you think you could give up a morning here or an afternoon there for some of this then please feedback and we can see what we can do as a group. Any ideas / comments/ suggestions welcome. It may be that something is already up and running in which case I'm happy to volunteer (am fully DBS enhanced checked).

Brian Braybrooke
High How do we get the Help , Could do with the awareness help on Scams would apprciate any help with a Handout

Simon Lundy
Hi Brian, Im not sure if there is a handout available on this but you're quite right in that this is also a very important issue. There is a post on this particular issue on the home page (its about distraction thefts...) - you could post on there and see what information comes back. Or, you could call the local police station in Wilmslow, see if they have any useful information for you.