Hockey: Both teams fight back to secure a draw 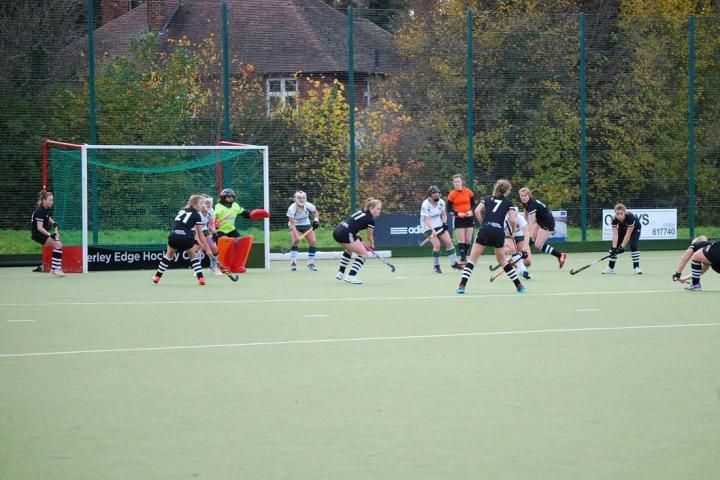 Result: 3 – 3
Due to the ever increasing Covid-19 restrictions, this was the only game played in the Women's England Hockey Northern Conference.

Having not played a game the week before, coach Kelly Fillingham had put the Women's 1s through a tough two week training camp to prepare them for the weekend's bottom of the table fixture against Cannock Hockey Club, a real six-pointer.

Unfortunately the first quarter didn't play out as Alderley Edge had hoped and they found themselves 2-0 down.

However, the team usually play their best hockey when chasing the game so this score line didn't affect their confidence.

Alderley Edge came out stronger in the second quarter which made for a more even game.

Both teams were battling hard, Alderley Edge were passing the ball around quickly and started to get work the Cannock's goal keeper, while Cannock were hitting Alderley Edge on the counter attack.

Finally Sasha Hateley got the goal Alderley Edges play deserved, when she found the back of the net following some great skills.

This goal gave Alderley Edge the additional belief that a win was still in their hands.

Into the third quarter and Alderley Edge's superior fitness was starting to show, with Cannock dropping deeper to ensure there were no defensive gaps for Alderley Edge to exploit.

During the fourth quarter Alderley Edge were looking more likely to score the winner, so it was to everyone's disappointment when Cannock retrieved the ball deep in their half and broke quickly before finishing clinically in the corner, leaving Alderley Edge keeper with no chance of the save.

One of the greatest attributes of this team is their attitude in difficult situations.

Having conceded so late in such an important game the team could have folded, but instead Alderley Edge kept playing their hockey.

Alderley Edge were rewarded for this attitude when, as the coach was reminding the team "it only takes 10 seconds to score", Sarah Hopkin sent a brilliant ball 20 yards into the Cannock 'D' which found Lottie Dennett, whose perfect touch deflected the ball into the goal with only five seconds of play remaining.

The game didn't have time to restart and so finished 3-3.

An unfortunate result, but a great performance, showing why you can never write this team off.

Player of the match went to Lottie Dennett who's excellent positioning brought her two vital goals.

With another lockdown pending, the Men's 1st XI played host to Deeside Ramblers 2nd XI in what was possibly going to be the last game for a while.

Alderley Edge started the brighter of the two teams pressing with good shape and intensity to break down the Deeside attack and win the ball back comfortably.

Although Alderley Edge had the majority of the possession it was Deeside that took the lead, breaking quickly on the counter attack and their striker finishing into the corner on his reverse stick.

Alderley Edge didn't have to wait long for the equaliser, when Angus McCormick smashed the ball into the 'D' from midfield, which was met by the lightning quick Ed Fluck charging in to pick the ball out of the air and deflect it high into the roof of the net from a tight angle. Top class finish.

Deeside again took the lead after the ball broke to a Deeside attacker after their short corner broke down, and they chipped the ball into the net from close range.

Alderley Edge continued the create chances, winning a number of short corners, and the pressure finally told as creator of the first goal, Angus McCormick, turned scorer, putting away a drag flick to level the score at 2-2 going into half time.

It was much the same in the second half with Alderley Edge having marginally more possession than Deeside, but were unable to control the game and take the lead.

Some solid defending at the back, marshalled by Dominic Graham, meant that Alderley Edge were able to keep the deficit to just one goal, meaning they were very much still in the game.

With only a few minutes remaining, Alderley Edge were awarded a penalty corner following some good build up play.

This was excellently finished again by Angus McCormick, with a fantastic drag flick that went in off the post.

Overall a little disappointed with a draw, Alderley Edge will rue missed chances and not making the most of their possession, but they showed good character to come from behind three times.