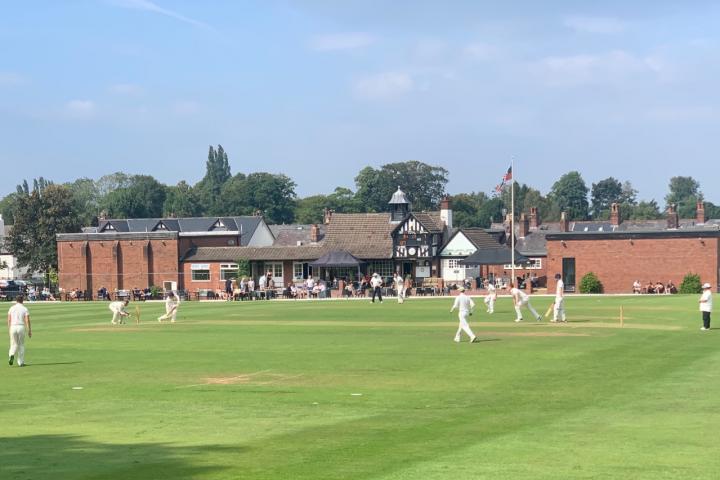 Alderley Edge CC's First XI edged past neighbours Cheadle on Saturday in a thrilling two wicket win with Lancashire star Stephen Parry the man most responsible with a match-winning knock in the second innings after home skipper Charlie Reid had won the toss and elected to bowl first on a sunny day at Moss Lane.

Cheadle came out of the blocks quickly reaching 48-1 before Jonny Scurrah claimed the key scalp of opposing skipper Dan Brown for 17 in the 11th over. Opener Elliott Bullock provided the mainstay of the Cheadle innings reaching 44 before being run out with the visitors on 101-4. From there Alderley's spinners Parry (3-25) and Reid (2-21) put the brakes on Cheadle's batsmen to restrict the visitors to 126-9 from their 40 overs, opening bowler Chris Sanders also claiming 2-18 for the hosts in a strong team bowling display.

Alderley's reply took a disastrous turn in the second innings as Cheadle's bowlers rallied to leave the hosts on 22-5 with Brown (2-10) and Will Holmes (2-24) leading the charge. At this point Parry came to the crease, firstly blunting the Cheadle attack and then beginning to build momentum for the home side with a brilliant counter-attacking innings. Supported in a seventh wicket partnership of 33 by Reid and a 30 run partnership for the eight wicket by Scurrah, Parry clawed the hosts to within striking distance of their target. Some big hitting from Alderley number 10 Sanders helped to power the home side over the line with two and a half overs to spare with Parry finishing unbeaten on 65 to seal a memorable win.

Alderley's Second XI fell to a three wicket defeat in the reverse fixture at Kingsway after losing the toss and being asked to bat first. After a 40 run opening partnership between Will Valentine (18) and Andy Kennedy, who top scored with 33, Alderley's innings struggled to gain momentum with the visitors dismissed for 125 from their 40 overs, Aaron Wall the stand-out from Cheadle's attack taking 4-28.

Alderley stayed in the hunt in the second innings, striking regularly to ensure the chase was no stroll in the park for the home side but an unbeaten 66 from opener Richard Nicholson was enough to see Cheadle reach their target in the 28th over to record a three wicket victory, George Valentine taking 3-35 from his 8 overs the pick of the visitors' bowlers.

On Sunday Alderley's Third XI claimed a 24 wicket win against Nantwich at Whitehouse Lane, posting 204-8 from their 40 overs thanks to 38 from opener Callum Wilson and a rapid 52 not out from Henry Scanlon including 8 fours and 1 six. Denny Morgan and Jack Billingham both registered identical figures for the hosts, each taking 3-36. 52 from Nantwich opener Ben Wright put the hosts in the hunt early in the second innings but two wickets apiece from Will Valentine and Ben Kersh swung things in Alderley's favour with Nantwich restricted to 180-8 from their 40 overs.