Lunchtime concerts resume with an uncommon pairing of instruments 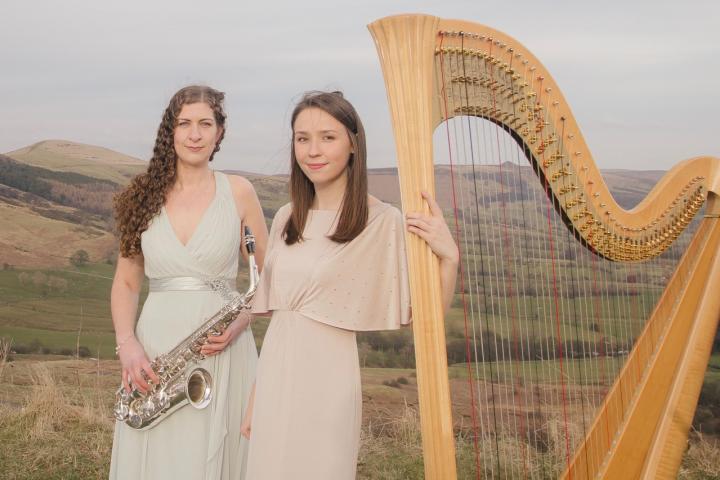 The lunchtime concerts resume at Alderley Edge Methodist Church on Wednesday, 16th January with a performance by Polaris Duo.

Gillian Blair (saxophone) and Elinor Nicholson (harp) formed the Polaris Duo in 2011 whilst studying at the Royal Northern College of Music and have since been exploring an eclectic range of repertoire and possibilities for this unusual instrumentation. Whilst at the RNCM they both obtained first class Bachelors degrees and Masters degrees with distinction and in 2015 were individually selected as finalists for the prestigious RNCM Gold Medal Competition.

The duo have performed regularly around the UK and recently made their international debut in Croatia at the World Saxophone Congress. They have performed at venues including the Bridgewater Hall, Buxton Opera House, Warwick University and the International Anthony Burgess Foundation as well as regularly performing for music societies. They were 2nd prize winners in the British Harp Chamber Music Competition and have been featured in the Lake District Summer Music 'New Generation Artists' Concert Series. They were recently named as BBC Introducing Artists and have performed live on BBC Radio 3.

The Polaris Duo is dedicated to presenting new music and expanding the repertoire for this uncommon pairing of instruments. They released their debut album; 'illuminate' in April 2018.

The music featured includes works by Manchester based composers Andy Scott, Rob Buckland and Melissa Douglas alongside arrangements of works by well known composers including C.P.E. Bach and Camille Saint-Saëns.

Admission is by programme £5, available at the door.

Proceeds from the concert will be donated to "Mary's Meals".