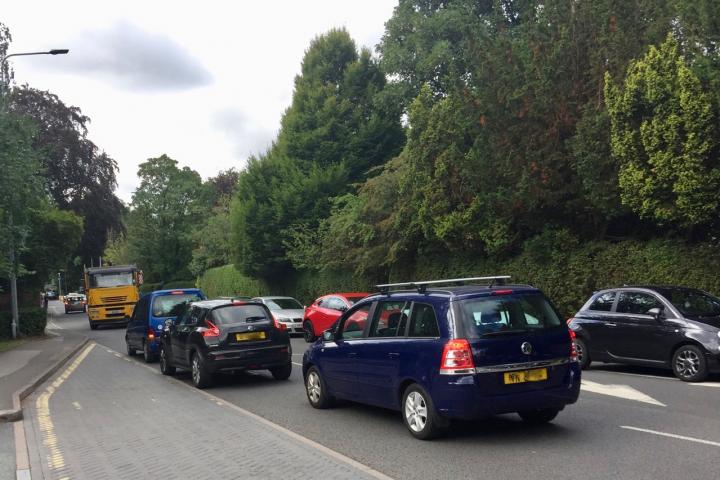 Will a cyclist have to die, or be seriously injured, before the Council acts? From events over the last year it is absolutely clear that double yellow lines are required along Alderley Road, from the Fulshaw Cross roundabout to Victoria Road.

Prior to the construction of the apartments on the Remenham site, adjacent to the roundabout, there was never any parking along this stretch of road. The builders' vans set a precedent and now, on a daily basis, the footpath is partially obstructed by parked cars between the roundabout and Chapel Lane.

I have seen a lady with a double buggy forced to walk out into the roadway, in the traffic, because she could not get through on the obstructed footpath. I have also seen the bus having extreme difficulty turning out of Chapel Lane, having to swing perilously close to the footpath on the other side of Alderley Road. There is a pedestrian crossing point here, with a central refuge, used by hundreds of High School students every weekday; drivers on Alderley Road often cannot see clearly because of parked cars.

Parking has now extended on a daily basis from Chapel Lane to Victoria Road, opposite the Coach and Four. Last week I saw a cyclist have to perform an emergency stop and dismount into the bus stop layby, shown in the photo, because a United Utilities tanker was coming through, completely filling the 'wrong' half of the road. The photograph was taken this morning; later in the morning the queue of vehicles stretched right onto the roundabout, as a large tractor and trailer was struggling to get through.

I have contacted the police a couple of times and they say that they have cautioned drivers who obstruct the footpath and that, as there are no yellow lines, the parking wardens could not act because there were no parking restrictions! They suggested that Cheshire East Council should be contacted to get some lines put in place.

Out of interest I thought that I would see what the two ward councillors said, on this website, when they made their pre-election statements:

Ellie Brooks, Monday 20th April 2015 - "When asked about the important issues facing Wilmslow, Ellie said "Gary (Barton) and I have been canvassing for some months and we have noted the issues raised on the doorstep. Parking, road safety and the need to find sensible solutions". She continued "I will be campaigning for lower charges at underused car parks, and the extension of the Broadway Meadow car park, and I will work with CEC for improve pavements and continuing road improvements. I will also work with residents, the town council and with Gary to preserve the character of Wilmslow. I will always look for ways to improve what we already have and listen to concerns of residents and work with them."

Gary Barton, Saturday 18th April 2015 - "I (reporter) asked Gary what he considered to be the important issues facing Wilmslow. He replied "Parking and road safety are major challenges for Wilmslow. We need to find parking solutions that support local traders and that prevent our local streets from being clogged up by all-day commuter parkers. We also need to find new ways to reduce speeds on certain local roads. I want to see continued road and pavement improvements." He continued "I will campaign for an extension to the Broadway Meadow car park near the leisure centre and for a reduction in parking charges at the under-utilised Spring Street car park."

Given that the next election is looming, there is some food for thought in those words.

Any other views out there?

Deleted Account False Name
I can't actually believe no one gets ticketed or towed from parking down this road; you don't need double yellow lines to know you can't park on a corner, or opposite an entrance. It's dangerous and that's all there is to it! Every time I drive down this road I have to dodge cars coming from the other direction - whose right of way is it? Theirs, yes, but when the traffic is a constant stream you'd never get anywhere waiting for a lull :(

Vince Chadwick
Obstruction is an offence, and this is plainly obstructing the highway. As is the out of control both-sides parking on Buckingham Road. Why will the police not act?

Harry Martin
Maybe the police don't have the resources to act . What has happened to the mobile wardens that used to zoom around on bikes ? If the council needs revenue these would self fund . I walked to Bramhall last week . There were 2 white vans parked up on the pavement . I had to walk in the road on a bend near The Bottle Stop. On my return an hour later they were still there . Nobody minds a temp drop off but this was a joke !

Tim George
Welcome to Wilmslow new free car park. Local traffic warden says the parking isn’t illegal ! Police say it’s not their issue it’s the councils. These cars are an obstruction and cause issues in and out of Wilmslow. Soon there will be a serious accident and no one will take responsibility. I suspect council will act once building work is all complete.

Vince Chadwick
The wardens are correct in that there are no parking restrictions in force on these stretches of road, so they are powerless to 'ticket' cars. It is an obvious obstruction of the highway (which is an offence), both on Alderley and Buckingham roads, but as far as I am aware only the police can take action against that.

Clearly the police are not taking action, and I'm told they are telling those who complain to them to lobby Cheshire East for the application of parking restrictions (yellow lines) so the wardens can take action. Well, we all know how responsive Cheshire East are (remember this when the local elections come up).

The police won't act, and pass the buck to Cheshire East. And Cheshire East just do nothing. It is a ludicrous situation.

My daughter lives in the Cotswolds. When the local heritage railway re-opened Broadway station there was an immediate parking problem on the adjacent main road as the station car park is not yet completed. Within weeks the local authority had imposed double yellow lines, and the obstruction of the main road ceased.

So it can be done. But not, apparently, by Cheshire East.

Tim George
Driving home down adlington road last night (Thursday) around 530 plenty of traffic due to all the road closures so no chance of speeding policeman with speed gun. It's obvous what the priorities are.
It will take a serious incident for something to be done. And let's not forget what will happen to the poor people involved in any accident the police will will probably treat them as the guilty until proven innocent.
All it needs is a couple of tickets issued for blocking the whole of the road as outside the coach and four and this issue I am sure will be resolved.