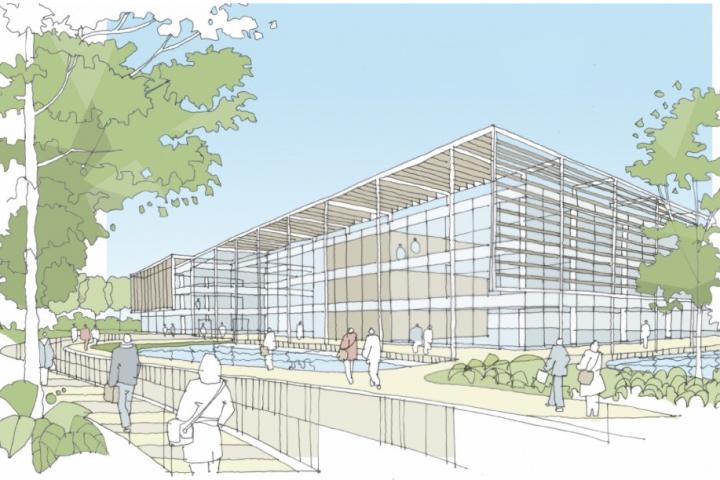 The proposed site sits to the east of the existing Royal London campus, accessed from Alderley Road which is located within the Cheshire Green Belt.
The scheme includes additional car parking, better access for vehicles, the creation of new pedestrian and cycle routes to the site and improved landscaping.

The planning application is now available to view online and shows that the new office building is envisaged to be three or four storeys high with roof top plant room and have an internal floor area of up to 17,000m2.

The new contemporary building has been positioned in the south eastern corner on the main approach into the site to give it greatest prominence from the west coast main railway line and to make it visible when entering the site.

Access to the site will remain via the existing entrance off Alderley road, next to the existing northern lodge building, but it is proposed that the existing entrance be widened and extended in front of Harefield House. Plans also include a new mini roundabout, with new access roads to service the visitor car parking, a shuttle bus drop off point, staff car parking and new landscape features such as lakes and ponds designed to enhance the arrival experience at the site.

The existing mature trees which run through the middle of the site will be retained where possible as key features of the site around which a new footpath and cycle path will connect to the north of the site.

According to the Design & Access Statement "The layouts are indicative at this stage but the initial concept work suggests a pavilion style building split by a central 'street' for internal circulation and communication. the main entrance to the building will be from the western end of this 'street' accessed from the new public realm fronting the building."

Included in the application is an indicative masterplan which shows how the Royal London scheme could sit within the wider context to deliver the aspirations of the site which are contained within the emerging Cheshire East Local Plan Strategy.

The land to the north of the outline application site has been zoned to show an area to accommodate 80 dwellings, along with 1 hectare of land provided for additional sports pitches for joint use by Wilmslow High School and occupants of the Royal London offices.

In March 2015 Royal London, which employs around 900 full time staff, announced they plan to create an additional 450 new jobs in Wilmslow and the outline application says the plans could accommodate up to 1500 full time employees.

Additionally, up to 1,100 additional car spaces will be created on site.

Royal London is holding an open exhibition to display the plans and present proposals at Wilmslow Public Library on Thursday 19th May between 12:00pm and 6:30pm. Members of the professional team acting for Property Alliance Group and Royal London will be on hand to answer questions and explain the proposals in more detail.

Alan Brough
Could Royal London perhaps consider a much more neighbourly and environmentally sound plan and re-locate their developing business to Alderley Park where there are acres of high quality office space available on a ready-made site located at the end of the by-pass.

In doing so, they would relieve the already congested roads ofAlderley Edge and Wilmslow of approx. 1000 car journeys per day and would negate the "need" to develop precious Green Belt land.

If this plan gets the go ahead it will precipitate the ribbon development of Bollin Fields and effectively join Wilmslow to Alderley Edge.

Barry Buxton
And your point is, Jon?