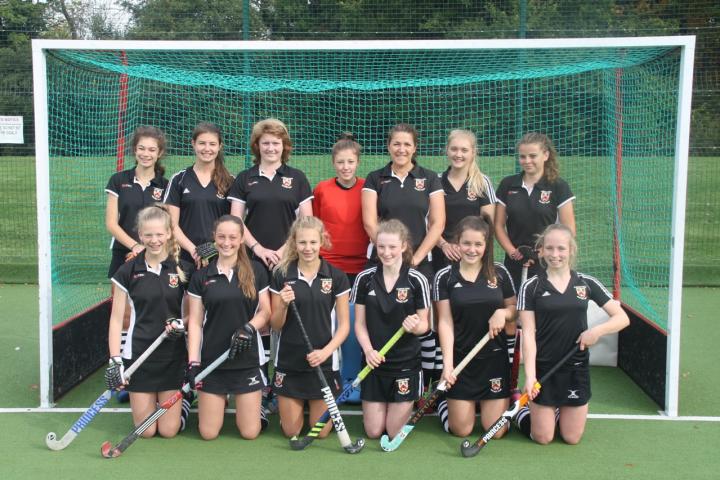 Alderley Edge Women's 1st team beat Crewe Vagrants HC 5-1 in a rainswept encounter on Saturday to maintain their 100% winning record. That's a splendid 8 North League wins from 8 games, scoring 40 goals and conceding just 5. Edge are top of the league with a game in hand on second place Wilmslow - who are snapping at Edge's heels with an impressive winning run themselves.

Crewe play a solid compact team shape and have an impressive defensive record. They are hard to beat and held Edge to just a penalty corner deflection goal from Amanda Bennison in the first half. In the second half Edge were rampant with superior pace, controlled passing and very polished small unit play. A second Edge goal soon came followed by Crewe snatching one back after slack defensive marking. Three more open play goals followed as superior fitness and attacking skills told. Scorers were Katie Austin, a star performer on the day with a well deserved hat-trick and Sarah Stretton.

Edge Women's 2nd team played away at Cheshire Div 1 leaders Sale and went down 5-2 despite enjoying the majority of possession and winning multiple penalty corner opportunities. Sale were ruthless scoring 5 times from just 7 circle entries. Julia Tennant scored both Edge goals, a penalty corner and a penalty stroke. The young Edge team displayed a fantastic work rate but need to capitalise on penalty corner awards and be a bit tighter in defence to beat the top teams in this league.

Edge Women's 3rd team are the form side in Cheshire Div 2 unbeaten in their last 8 games. They were made to work very hard for a 4-3 win over Golborne 1st team. Golborne scored two early penalty corners but the young Edge team kept their composure and were rewarded when player of the match Tori Blackwell scored a great goal lifting the ball over the keeper. The equaliser came from a penalty corner pass routine rounded off by Emily Fell. After the break Annie Green made it 3-2 to Alderley only for Golborne to equalise from a rare breakaway as Edge dominated possession. A late penalty corner award saw Emily Fell grab the winner after a neat interchange of passes with Nicola Hall. Edge now move up to third in the league.

Alderley Edge Women's 4th team were unlucky not to take something from the match at Wilmslow 3rds, going down 2-1. Wilmslow were very effective at penalty corners scoring twice. Edge had the lions share of the play in the second half but couldn't find an equaliser.

The Alderley Edge 5th team enjoyed their first success of the season in Cheshire Div 4 against Lymm 5ths winning 4-2 with Lois Mc tiffin scoring three and 'Back to Hockey' regular Jane Ashworth adding another. The side is a blend of young girls new to adult hockey and 'Back To Hockey' players. It's really pleasing to see them get stronger as the season progresses and this win will boost confidence for sure. The Women's 6th team is a similar mix of youth and experience and they continue to play some good hockey but went down 4-1 at Bowdon 6ths.

Alderley Edge Mens 1st team drew 1-1 with Formby in a very physical contest. Edge scored first through Oliver Hall against in the North Premier Division match at The Edge but were denied a win by a late penalty stroke award to the visitors, converted by Nick Giles.

Edge Men's 2nd team shared the points with league leaders Wilmslow 1st team in a thrilling 5-5 away draw. 4-0 up at half time Edge will be disappointed to have let Wilmslow get back in to the match. Edge scorers were Oli Parker (2), Joe Coxon and Nick Sims (2).

Edge Men's 3rd team remain top of their league after a 4-0 win over Wilmslow 2nd team. Alderley dominated from the start with the pace of Fluck causing Wilmslow problems and Dadah scored two close range goals before half time. Alderley continued to create chances and remained miserly at the back with strong performances from Elliot Webb and veteran Laurence Barnes. Another close range strike from Dadah and an expertly struck penalty corner from Barnes sealed the victory.

The 4ths were beaten 2-1 by Mossley Hill 1st team and a waterlogged pitch saw the 5th game cancelled. The under strength 6th went down to Wilmslow 3rds 12-0, the 7ths drew 0-0 at Crewe 3rds and the 8th team lost 4-1 to Wilmslow 4th team.

On Sunday there was success for the Men's over 40's Masters team in the EHB Trophy, rolling back the years to beat Prescott 11-0 and gain a place in the last 16 of this national competition.
There was a hat trick of hat tricks, with Mike Parkin, Ben Hodkinson, and ex AEHC first team captain Simon Livingstone all on target.

Simon Hunt also notched one up with a smart strike, and Ed Johnson completed the scoring. Special mention to the Ed Offer, Jon Talbot, and Dan Jones(GK) in defence for keeping a clean sheet.

So on to the next round on the 6th Dec. As the only North West team still in the Trophy, Alderley are looking for a home draw!