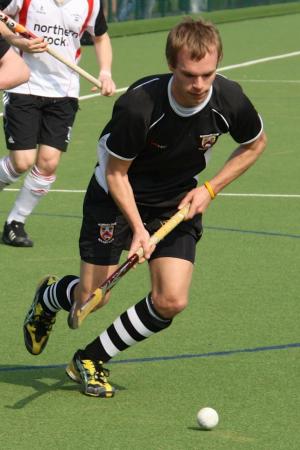 Alderley Edge Men's first team made the long journey to Whitley Bay on Saturday knowing that they needed victory to keep their hopes of survival in North Premier Division intact.

An eventual trip up meant that time was at a premium, but it did not stop Alderley flying out of the blocks.

In the opening exchanges Whitley bay could not get out of their own half as the youthful midfield of Jackson, Whitehead and Hughes were committed in the tackle and managed to pick off any loose passes. The Whitley bay 'keeper was called into action to sweep up behind his defence as Warburton and Coxon threatened.

The backline of Alderley were looking solid as Pont and Sibley were able to launch an attacking platform. Until the latter's injury forced a reshuffle.

Alderley deservedly took the lead as Sam Gregory was on hand to sweep the ball home from the good work of Warburton in the D. It was soon two as the same pair again combined as Gregory's faint touch was enough to beat the 'keeper.

As the half drew on Whitley Bay got more into the game and they should have scored when the striker had an easy chance at the foot of the post but delayed long enough to allow Riley to get across and make the save.

Alderley still looked good on the break and the Whitley Bay 'keeper was kept busy as Drummond and Coxon continued the pressure in and around the final third.

On the stroke of half time Whitley Bay got back into the game as an ariel pass got past the Alderley back line and gave the striker an easy finish.

The second half was a scrappier affair as the tackles became untidy and ill discipline crept in, particularly from the hosts as they battled to get a foot hold in the game. Whitley Bay continued to either throw ariel passes or dribble the ball and had limited success with Badger and Kay able to tidy up and Bryant and Williams battling hard in the midfield.

Joe Coxon grabbed Alderley's third as an incisive break lead to Warburton rolling the ball wide of the 'keeper for a straight forward finish.

Whitley Bay started to be awarded more penalty corners by drawing and creating fouls in and around the D. Eventually they pulled a goal back with a routine going in at the far post. With five minutes to go they scored another to make the score 3-3.

Alderley then had a piece of luck as following a free hit just outside the D Whitley Bay scored, but they had started play before the whistle and were made to retake it. Alderley defended well and cleared the ball. Warburton closed down the Whitley Bay centre back and his attempted clearance was intercepted. Warburton's shot was saved by the 'keeper and rolled towards the goal and Gregory was on hand to knock the ball over the line with only 45 seconds left, completing his hat-trick. Alderley won the ball back from the restart and ran the ball into the corner to see out time and take home the spoils. The win means that three teams are level on points in 9th place.

The second team did well to fight back from two goals down to salvage a point against Bolton with goals from Wildig who converted a penalty corner and an own goal. They will see it as two points dropped as Bolton sit at the foot of the table; however it keeps them in the top two places.

The 3rd team marched on with a 9-0 thrashing of Bangor, making it a perfect 16 wins in 16 games. They have a 16 point lead with only 6 games to go, so victory next week will give them the title. The goals came from Oli Kennon (3), Andy Walker (2), Richard Williams, Rob Marks, Daniel Farrer and an Andrew Bryant penalty stroke.

The 4s had a competitive match away at Winnington Park drawing 2-2, which keeps them in the hunt for promotion.

The 5s beat Timperley 9-0 to move into second place above the 6s who drew with leaders Sale 2-2. The 7s had a comfortable win 7-1 at home to Chester.