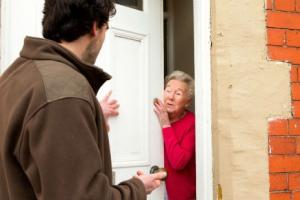 'Operation Rogue Trader', involving trading standards and enforcement officers, together with police, formed part of a major crackdown on sub-standard and dishonest contractors. More than 20 other local authority areas in the North West carried out similar operations.

Carpet fitters, roofers, gardeners and several other trades people had to down tools as council officials and police checked paperwork, business details and addresses so that customers could be satisfied they had engaged legitimate contractors who comply with the required legislation.

The operation, mainly in Wilmslow and Handforth, sought to reassure residents and send a warning shot to any rogue operators carrying out sub-standard work, or using high-pressure sales techniques, such as cold calling. Council officials also investigated potential fly-tipping of commercial waste, while police carried out vehicle and driver checks.

Several potential offences were uncovered, ranging from inadequate information on business documents to possible fraud. These are now subject to further investigation.

Councillor Mick Warren, chair of Cheshire East Council's environment and communities committee, said: "Rogue traders, who pressure householders into giving them work, or traders who do a poor job, leave their customers feeling fleeced and out of pocket. They are a blight on our communities.

"Fraudulent trading practices, which exploit and profit from vulnerable and susceptible customers cause misery and distress to others and cannot be tolerated in Cheshire East. We want our residents, who may already be struggling with high energy bills, to feel safe in their homes and not be forced to accept sub-standard work or be intimidated on their doorstep.

"This was a further example of the excellent partnership between the council, Trading Standards North West and Cheshire police in the fight against often undetected criminal behaviour."

Operation Rogue Trader was carried out on Monday, 17th October in the Wilmslow and Handforth area after previous complaints had been received by the council. Anyone who may have been the victim of a possible trade fraud, or who has been approached by a suspect trader should contact Citizens Advice Consumer Service via 0808 223 1133 or online.