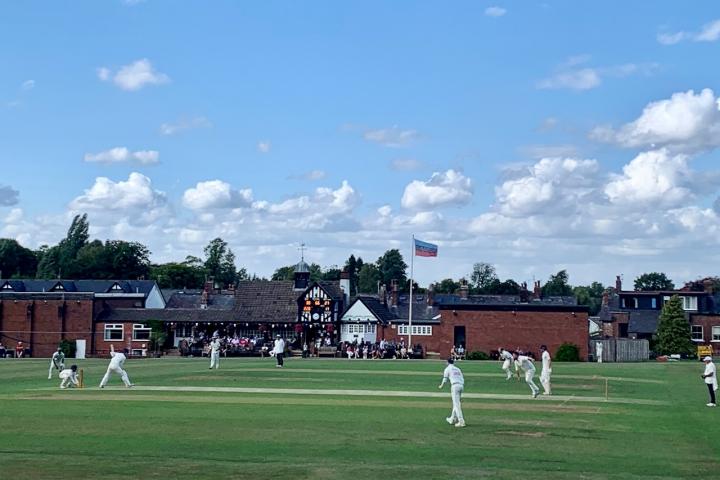 Winning the toss and electing to bowl first Alderley struck early with Richard Wilkinson removing opener Lee Dixon with just 5 on the board but were made to toil for their next breakthrough as Rick Moore and Alex Money added 99 for the second wicket before Wilkinson, returning for his second spell removed both in the space of four balls.

Opener Moore continued to be a thorn in Alderley's side after riding his luck early in his innings, making his way to 68 where he fell to Wilkinson before the seamer completed a five-wicket haul bowling number 5 Luke Ramsay in taking 5-51 from 17 overs leaving Chester on 153-5.

Jimmy Naylor replaced Wilkinson at the Village End and immediately made an impact striking three times to reduce the visitors to 206-8 collecting 3-63 and then completed an excellent running catch in the outfield to reward spinner Will Valentine with the wicket of Cole Palmer for 38 after bowling with good control in difficult conditions from the opposite end into a stiff breeze that continued through the first innings.

Valentine himself then affected the run out to take Chester's final wicket, hitting the stumps from short Third Man with George McCormick short of his ground in the final over to close their innings on 220.

Alderley made a strong start in reply with openers Sam Perry and Ed Foster adding 94 for the first wicket before Perry departed for 43 thanks to a superb one-handed catch from the diving Martin Green at midwicket.

Replacing Perry, number 3 Archie Vaughan looked at home from the off piercing the offside with a series of sweetly timed cover drives in a fluent 70 from 83 balls as he and Foster added 126 for the second wicket with Alderley taking command of the game leaving Chester to shuffle their attack, using seven bowlers in all in the hope of a breakthrough.

Foster tucked into some wayward bowling, plundering anything off his pads to the boundary as the pair cruised towards the 221 required, unfortunately Vaughan was eventually trapped lbw with the scores level but Foster remained unbeaten after amassing 86 to see Alderley home for the loss of just two wickets in a confident batting display. Alderley sit third in the table with 4 games of the season remaining 15 points behind leaders Hyde but with the wind in their sails.

Alderley's Second XI also secured maximum points in a crucial clash at Oulton Park as Jon Usher's side continue to climb away from the relegation places. Winning the toss the hosts elected to bat first but were soon in trouble at 28-2 thanks to two early strikes from Alderley opening bowler Ben Chapman.

The hosts rebuilt to 89-2 on the back of 34 from opener Alex Gill and 36 from number 4 Josh Park before both were removed by partnership breaker Dil Yahathugoda who picked up 2 wickets in three overs. The younger Yahathugoda, Liam, then took over removing Oulton Park's middle order in a crucial spell of 3-21 from 8 overs as the hosts slumped to 122-8 before Chapman returned to complete a 4-wicket haul claiming the final two wickets to bowl out the opposition for 132 in the 37th over.

Alderley's reply started shakily as opener Liam Yahathugoda and number 3 Ashray Bhamidipati were both removed for single figures by Alex Gill but 68 not out from opener Calum Wilson and an unbeaten 60 from number 4 Tejas Rao secured Alderley an 8-wicket victory, also crucially restricting Oulton Park to just 2 points from the contest as the visitors took the maximum 25 points available.