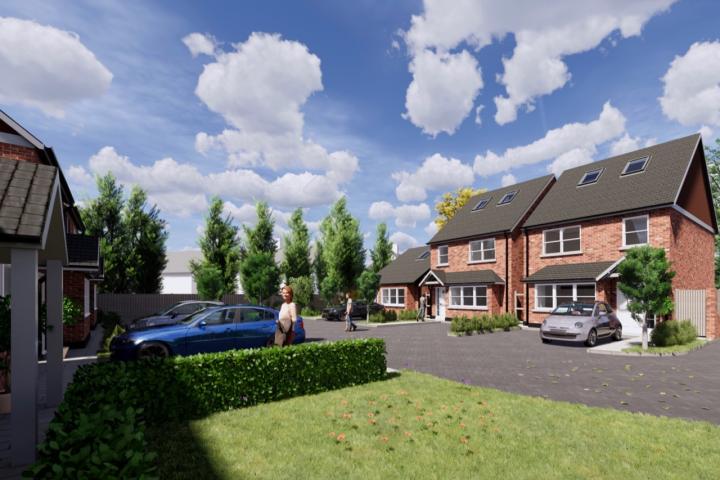 Planning permission for six new houses on land off Heyes Lane previously gifted to the RSPCA has been refused again.

In addition to 4 four-bedroomed houses over 3 floors, 1 three bed Dorma-bungalow and 1 two bed Dorma-bungalow, the proposal called for a stretch of Heyes Lane to be moved to create a larger junction to access the site. This would result in the loss of the green verges in that area with the only remaining grass verge being the one outside the Emmerson offices.

They argued that despite moving the highway, destroying the verges and changing the historic character of the road, visibility at the entrance would not be improved as there is on road parking on that side of the carriageway all day.

The committee were divided over the development with Cllr Browne having the casting vote which resulted in planning permission being refused on the grounds that it failed to meet standards of access, did not enhance the character of the area and constituted over-development on the plot.

Cllr Browne commented, "Following a two-hour discussion by members, the application was proposed for refusal with four votes in favour, four against and four abstentions, which meant that the decision came down to a casting vote. As Chair, the casting vote is not something that I use lightly; however, on this occasion I felt that on balance the application should be refused. I also had concerns that the council's parking policies, which for four-bedroom dwellings require three spaces to be provided within the curtilage of the site, were not being adhered to."

David Carey
Absolute common sense prevails. Why destroy a historic bit of Alderley Edge, ruin the whole area for local residents nearby and living in adjoining roads, and a dangerous idea of moving roads and verges just to accomodate houses which should not be built in the first place as it was supposed to be for wildlife.

Nick Hall
Shame that it is the businesspeople who trusted the RSPCA and not the scrambags who ignored the wishes of the man who left them this land who are suffering as a result of this refusal of permission.

RSPCA you should be compensating the people you scammed. The relatives of the man who left you the land and the people who bought it in good faith. You are a disgrace to charities. Not that you care so long as you have the cash in your coffers.

Jane Grantham
Totally agree with you David, this is why we’re fighting so hard to stop any development

Alan Brough
I fear that this is just a stay of execution.

Emerson will be back with a revised plan before long.

In the meantime common sense has again prevailed.

Jez Jones
Ultimately the site will be developed as an appeal will lodged and won because the site is compliant with planning policy, regardless of whatever the situation was before with the RSPCA.

Well done to Craig, decision making in the interest of local politics but at the expense of the tax payer.

Brian Trafford
IF this permission is eventually granted, what sort of message will it send to the generous people considering donated to charities, they will be reconsidering donating large sums of cash or property.
Brian trafford

David Smith
Seems to be a prevailing theme when it comes to planning.
There are many who oppose, they are listened to, the planning process agrees - and that should be that, except we have an appeal process that seems to be part of our democracy [fair enough] that can go on forever. I believe there are times when parties [sometimes our council] give in because they cannot justify the cost of fighting a further appeal. All this means that the rich guys win in the end and justify changing the nature of the place where we live on the basis that it is providing jobs and helping the local economy when all they are doing is rising up the list of the richest persons in the UK - until they die and then no longer appear on the list! Rich people please take note - how are we going to remember you after you have gone and not taken ANY of your riches with you?

Kelvin Briggs
Interesting that only four of the twelve people on the committee actually voted against the application despite the unusual circumstances surrounding the history of this piece of land.
Why would a group of four committee members go to the meeting, discuss the application and then sit on the sidelines by abstaining to vote?
I wonder if the closeness of the rejection and the use of a casting vote to decline the application will influence the outcome of any future appeal against the decision ?