Hockey: Ton up for The Edge!! 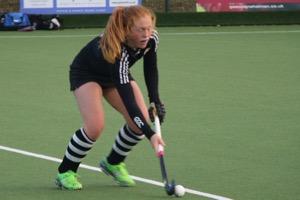 Alderley Edge's Ladies 1s Hockey team enjoyed an emphatic win over Oldham Hockey Club on Saturday at the Edge, 6 goals to 1, scoring their 100th goal of the season!!

Edge started the match with some real pace and intensity and opened the scoring in the first 10 minutes with a goal from Jen Park and doubled their lead on 24 minutes with a penalty corner strike from Sarah Hopkin. With two further goals from Saskia Swatland and Louise Ogilvie just before the break they went in at half-time firmly in control of the match.

The second half saw more possession and territorial advantage as Oldham sought to limit the scoring opportunities but further open play strikes from Hopkin and player of the match Park took them 6 nil ahead before Oldham pulled one back through Louise Howard with just a few minutes left. The win puts Edge six points clear at the top of the League with second placed Wilmslow dropping points to Timperley at home.

The Ladies 2's had a comfortable win against Northop Hall. Their keeper is renowned so it was a great start when Jude Offer scored after a shot from Jess Clitheroe within 5 minutes. The second was turned in by Jess Clitheroe for 2-0 at the break.

They pulled one back from a short corner and then Rachel Stoner scored the goal of the match getting a touch on a howitzer of a cross from Clare Davidson which took it into the far corner. The game got a little bad tempered after that but Northop Hall didn't get into the Edge D, while Edge had another couple of chances to score. A good win and revenge for an unlucky 2-1 defeat earlier in the season, the win cements the 2's position in 3rd place in Cheshire Division 1.

The Ladies 3s travelled to Oswestry. A nil nil draw did not reflect the standard of play and Oswestry were a strong and mature side, good at positional play and marking. Alderley were unlucky not to break the deadlock, given some good shots on goal from short corners, Ellie Ward also hitting the post. The play moved well with great commitment from both teams.

With 5 minutes to go, Oswestry were awarded a short corner but great defensive work from Rhiannon the goal keeper and defender Katie Haszeldine, at full stretch on the goal line, ensured the ball was kept out of the net. Players of the match were awarded to both Captain Rebecca Hall and Caitlin Polley. A big thank you to all the many parents for making the long journey to Oswestry to show their support.

The Ladies 4s were desperately unlucky to lose 2-1 to Runcorn. Runcorn scored early but then the defence got organised with Becky Steele and Sarah Laughton to the fore. Edge played some lovely hockey through the midfield and Katie Roberts deservedly equalised with a great individual goal.

Second half Alderley stepped up the pace and were very unlucky not to score more than once, with the Runcorn keeper making some good saves and some missed opportunities. After dominating the half they were then hit by a sucker punch - Runcorn broke, earned a short corner which wasn't cleared and they scored.

The last 5 minutes was a siege of the Runcorn goal but nothing fell to the girls and they couldn't find a wholly deserved equaliser. Yet again a result which does them no justice but the players and manager are confident these performances will yield the right results in the coming weeks.

Playing away to a very strong Wrexham team in a lunchtime push back the ladies 5s earned a fantastic 1-1 draw to boost their fight for survival in Cheshire Division 4. It was a very dogged and determined performance from the whole team and whilst it would be wrong to single out individuals a special mention must go to stand in keeper Emma Coghlan who did a tremendous job.

The ladies 6s went down 7 nil to unbeaten league leaders Neston but manager and GK Sarah West was very proud of a fantastic team effort with special mention for the team's defence who made Neston work very hard for their victory.

The Mens 2s dominated their match vs Oxton 2s winning 5-1. However many missed chances meant the score remained a nervous 2-1 with 10 mins to go until 3 late goals gave Alderley a victory to keep them top of North Div 2.

Man of the match Chris Hardy scored penalty corners goals at the start of each half, Joe Coxon scored the vital third goal and Matt Hardy finished off two team goals in the final 5 minutes.