Plans for Next home and garden superstore approved 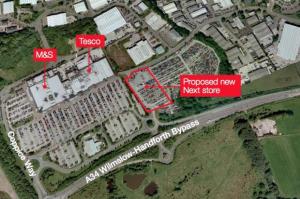 Next Plc has been granted planning permission for a new home and garden store at Handforth Dean.

The retail store with a conservatory, garden centre, coffee shop and 209 car parking spaces will be built on land off Earl Road, adjacent to the Handforth Dean retail park.

The 1.26 hectare site is part of a larger area of land, approximately 6 hectares, and located within an area of Employment Land as identified in the Macclesfield Borough Local Plan. The site is owned by Cheshire East Council and has remained undeveloped for a number of years. There have been several applications for mixed use developments on the site since 1995, including proposals for a cinema, leisure and retail development. All of which were refused.

The site was most recently used for airport car parking from 2005 to 2010, accommodating in the region of 3,000 cars, and is currently vacant.

However, it states in the planning framework that "Planning policies should avoid the long term protection of sites allocated for employment use where there is no reasonable prospect of a site being used for that purpose".

The site has been marketed on three separate occasions: at some time around 2006, January 2011 and February-March 2012. 23 expressions of interest were received following the 2012 marketing, of which 16 included some form of employment use. Next Plc were one of those parties that expressed an interest in the site, and are the only ones to have come forward with a planning application.

Planning permission has been granted subject to a signed S106 agreement, providing a financial contribution for: the off-site provision of Public Open Space (for improvements and additions to the facilities at Meriton Road Park, Henbury Road and Spath Lane); improvements to footpaths; the creation of cycleways; improvements to local bus services to and from the site and infrastructure works within the remaining 4.8 hectares of employment land.

This will be the first purpose built Next home and garden store in the country and will sell a range of furniture goods, with a conservatory style building and outdoor sales area for garden products. The proposed store will replace the existing Next store at Stanley Green and also sell their range of clothing, footwear and accessories products.

The development could be completed within twelve months, delivering an investment of £10m and creating 185 jobs.

The planning application, reference 12/4652M, can be viewed on the Cheshire East Council website.

Sarah Lane
Brilliant but I thought there was one already in Warrington.