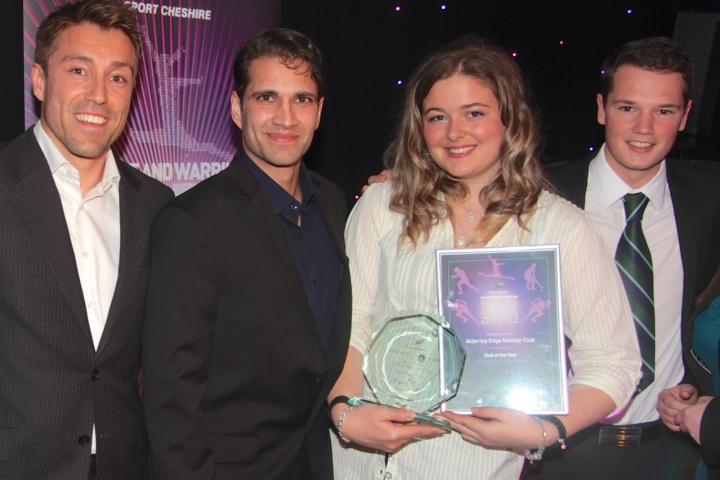 Alderley Edge Hockey Club has been crowned the Cheshire Sports Club of the Year for the second year running, finishing off what has been a great season for the Club.

The 10th Cheshire and Warrington Sports Awards, organised by Sport Cheshire, were held on Friday, 19th April, at the Halliwell Jones Stadium in Warrington.

The evening was a celebration of those who go the extra mile for community sport across Cheshire and Warrington. Guests heard first hand the contribution a wide range of individuals and organisations make to ensuring sport continues to prosper.

The awards were hosted by DJ Mike Shaft and special guest Sir Philip Craven, President of the International Paralympic Committee and new Patron of Sport Cheshire, gave an inspiring keynote speech to the guests, emphasising the importance of fun in sport.

"Our team of volunteers try to be welcoming and raise the bar with great facilities like the The Edge Hockey Centre. We provide a broad range of playing opportunities for children aged 5 through to veterans hockey. With seven Men's teams, six Ladies teams, a host of junior age group teams and weekly 'Back to Hockey' sessions for mum's, there is something for everybody.

"Next step is to provide hockey for local people in the community with learning difficulties and disability. The Award reflects a great deal of hard and passionate work by our volunteers and coaching crew."

There were three local winners on the night, in addition to Alderley Edge Hockey Club being awarded Club of the Year, Wilmslow High School was named School of the Year and Rosie Harris, School Games Organiser at Wilmslow High won the Embrace the Games Award.