Hockey: Alderley Edge get the better of Oxton 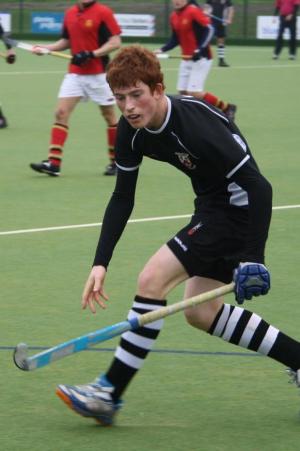 Following on from last week's battling draw, Alderley Edge men's first team played Oxton who sit second in the North Premier League, knowing that they would need to get something from the game to keep up their hopes of survival.

Alderley Edge started brightly and soon had the Oxton backline under pressure, the first clear opportunity fell to Tom Sibley but his fiercely struck shot was well saved.

The opening goal was not long in coming when after good build-up play Warburton was played in on the right hand side of the D; he fired the ball across the face of the goal where Sam Gregory expertly deflected the ball into the net.

Alderley went two nil up soon after when Andrew Drummond, who was a handful throughout, beat his marker and headed the D, his pass was read by the keeper who kicked the ball against his own player and the ball rolled out to Tim Pont who had the simplest of finishes.

Oxton in a rare attack were awarded a penalty corner and converted a good routine to make it 2-1.

Before half time Alderley Edge restored their two goal lead when, after concerted pressure, the ball went through a crowd of players and Andrew Jackson hit a half-volley like a perfect cover drive into the far corner.

Oxton came out for the second half in a much more aggressive mood and soon created opportunities with Riley forced into a couple of smart saves. With Badger and Kay defending well Alderley Edge were able to withstand further Oxton pressure and the midfield of Bryant, Hughes and Whitehead gained the edge in terms of possession giving Alderley Edge the opportunity to break at pace forcing Oxton to foul and they soon had a player in the sin-bin. A second soon followed for dissent and then Pont was upended when he tried to break forward resulting in a third yellow card. Alderley Edge continued to press forward but Oxton held on to get back up to full strength.

Oxton then pushed more and more players forward and Sibley and Pont were forced into a series of last ditch tackles. Oxton became more and more direct and put pressure on the Alderley defence, without breaking through, Coxon and Gregory created chances on the break but to no avail. Oxton then grabbed one back with a neat deflection. The rest of the game was played with Oxton laying siege to the Alderley Edge defensive third and Alderley looking to spring counter attacks. Oxton came close on a couple of occasions but could not find the equalizer and Alderley Edge were rewarded for a fine performance all around with the three points. The teams around them in the league also picked up points so it looks ever likely that nothing will be decided until the last week of the season.

The second team headed into the game in second place in North West Division One with Oxton just one place behind, the victors knowing that they would be hot favourites to pick up the remaining promotion place.

It was Alderley Edge who came home with spoils despite having to make a couple of changes to their squad they ran out winners in a tough affair. Benton and Scarsbrook needed to be at their most resilient, Alderley Edge took the lead courtesy of a Laurence Barnes penalty corner and then Adam Wildig wrapped up the points from the penalty spot after he was fouled by the goalkeeper. They now need just one point from their remaining two games to go into the North league for the first time ever and secure back to back promotions.

The third team are still on track for the perfect season after winning their 20th straight game, a much changed team ran out 4-0 winners with two Richard Williams' close range finishes. Oli Kennon rounded the keeper for number 3 and Callum Middleton's drag-flicked penalty corner completed the scoring.

The fourth team made it a clean sweep versus Oxton, turning around their recent form to win 2-0. The fives (6-1 away at South Manchester) and sixes (3-2 vs Triton) both won meaning that they are increasingly likely to be fighting it out for the title. The seventh team faced top of the table opposition in the form of Neston and lost 5-3.