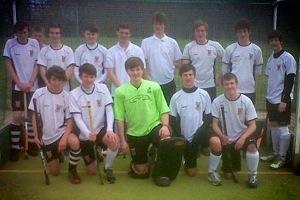 After being drawn away to Pelicans HC of Kings Lynn making it through in the EHB National Knockout was not going to be easy for Alderley Edge's U18s.

In a closely fought game it was the Alderley took the lead with a smart finish from Brandon Few.

Throughout it was a close encounter with Alderley Edge just shading possession and squandering several opportunities with Pelicans threatening on the counter attack.

It was a spirited display throughout highlighted when with 10 minutes to go the hosts found an equaliser.

The teams could not be separated in normal time or extra time and the game went to a Penalty Stroke shootout.

Bateman saved again and Ed Laughton made it 3-1 and when Pelicans missed their next attempt it meant that the long journey was well worth it as Alderley Edge had made it through to the finals day, to be played in April at Old Loughtonians HC in Chigwell, Essex.