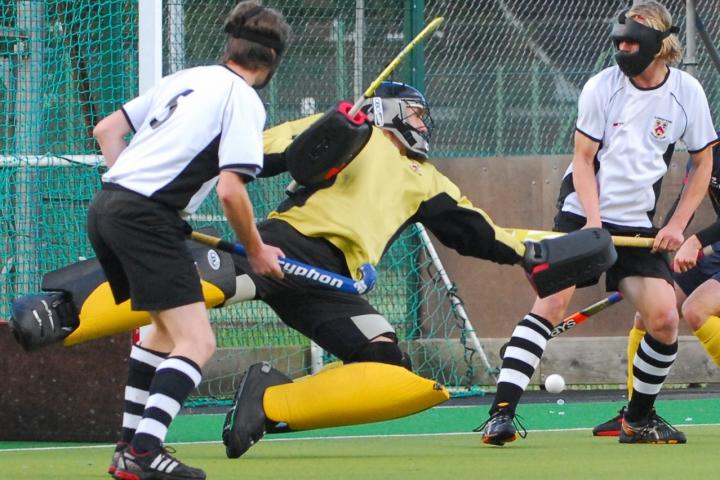 Alderley Edge Men had another successful weekend, winning 5 of the 6 matches played and there was victory and a draw for the talented junior teams.

In the North Premier Division Alderley Edge first team visited Timperley. Alderley made a good start and had the better of possession with Sam Gregory looking threatening out wide as Pont and Badger controlled the game from the back. Alderley looked tidy with the ball and were able to thwart would be counter-attacks. As the half drew on Timperley got more into the game and they won a couple of penalty corners.

It was Alderley Edge who took the lead, Pont's pass from the back found Adam Wildig in space and he fed the ball to James Warburton who fired into the bottom corner. And that is how it stayed until half time.

Unfortunately that was to be as good as it got for Alderley as Timperley came out with more purpose and within seconds of the restart won another corner, but the Alderley defence held firm. Moments later Pont was sin-binned for a foul in the 23 and another corner was awarded.

Timperley took advantage of the numerical advantage and found an equaliser with a shot from 10 yards out.

Alderley thought they had won a penalty corner of their own, but were given an advantage that nothing came from and Timperley broke to the other end and forced the Alderley defence in to giving away another penalty corner. This time Timperley's recent Polish recruit found the net, to put them 2-1 up.

Disappointingly Alderley lost their shape and a more committed Timperley side won the majority of possession and attacked in numbers and with pace. Timperley scored a deflected strike, a well worked close range finish and another penalty corner. The score line could have been nearer but Gregory and Coxon were unable to make the most of chances late on. Final score 5-1.

Alderley need to show resolve and bounce back next week at home to Formby, who currently sit bottom of the table but beat Alderley earlier in the season.

The men's second team were placed second going into the match with third placed Tameside in North West Division One. In a game that on occasion lacked subtlety it was Alderley who had the better of the play for the majority of the game.

Matt Hardy deservedly opened the scoring. Alderley's second was a little more fortunate with a Tameside defender getting the important touch in the D. Chris Hardy powered in his ninth penalty corner goal of the season. The scoring was rounded off by Will Hughes tapping in from close range. The 4-0 victory drew them level at the top of the league table and open up a 5 point gap to third place.

Table topping Alderley Edge 3s faced nearest challengers Wilmslow and made it 13 wins out of 13, Alderley deservedly took the lead with Oli Wildig's first time strike and were unlucky when the same player hit the post. This was not one of Alderley's better performances, they stumbled along and were eventually pegged back. Not to be denied victory with 5 minutes to go Jon Talbot popped up following a penalty corner to fire home to grab all 3 points. They now have a 15 point lead over the chasing pack.

The 5s were also pitted against Wilmslow and hammered their fourth string by putting 13 past them, with the visitors scoring once in reply. In the same division the 6th team travelled the short journey to Macclesfield and came away victors by the handsome margin of 5 goals to 1. The results leave the two Alderley teams in 2nd and 3rd place chasing potentially one promotion spot. The 7s hosted Denbigh and were another big winner, this time 7-1.

The Beavers beat Bolton 1-0 and have now picked up results against all of the top sides in the North West. The Badgers were held 2-2 also against Bolton.