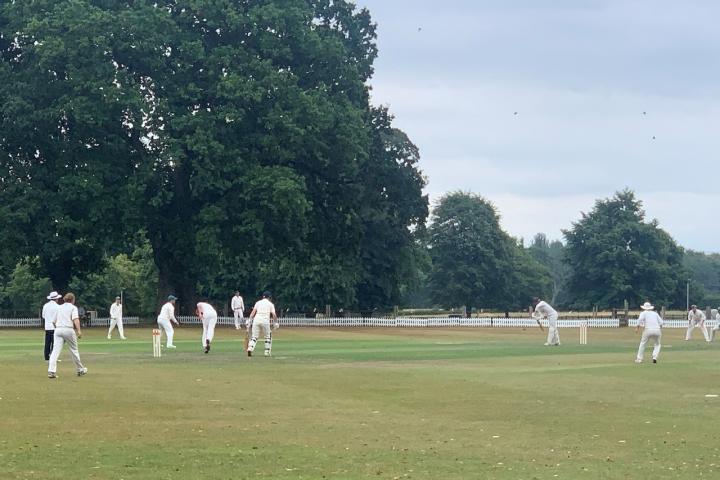 Alderley Edge First XI again made short work of the opposition batting line up in the Cheshire County Premier League on Saturday, this time at neighbours Toft to secure an 8 wicket win in a match shortened to 38 overs per side due to rain. On winning the toss, Alderley's decision to bowl first on a grey afternoon paid early dividends as James Naylor (2-19) reduced the hosts to 8-2 on an unusually green pitch at Booths Hall.

After a brief interlude for rain following Naylor's opening spell Richard Wilkinson struck with his first ball of the game, taking the wicket of Tom Forster via an excellent diving catch from Naylor, and continued to take full advantage of the conditions to rip through the Toft line-up on his way to claiming 5-25 from ten overs as the hosts struggled to handle the seaming conditions. Number 7 Scott Craig registered Toft's highest score of 18 as Alderley's attack swept through the hosts for a total of 95 in just 34 overs, 12 of which were registered as maidens.

With the threat of further rain always a possibility Alderley's openers wasted no time in the second innings, racing to 28 in the first 5 overs before losing Ed Foster, unlucky to be adjudged caught down the leg side for 14. Fellow opener Sam Perry hit 32 from 40 balls before being caught behind off a rearing delivery from James Scott to leave Alderley on 86-2. But there were to be no further hiccups as Tom Foreman, with 30 not out, and George Bell with an unbeaten 10 saw the visitors to victory inside 17 overs.

In the reverse fixture at Moss Lane Alderley's Second XI came within one wicket of victory, Toft's final pair managing to see out the final four overs of the match to secure a draw. After losing the toss and being asked to bat first Alderley's batsman responded with a number of solid partnerships to post 247-9 from their 50 overs on the back of 52 from Dil Yahatughoda, 47 from Ashray Bhamidipati and 43 from wicketkeeper Joey Chong. Alderley might have gone on to set an even stiffer target for Toft but for a key spell of 4-47 from 10 overs from Simon Mannering.

Alderley struck regularly with the ball early in the second innings through George Valentine (2-47) and Bhamidipati (2-42), who enjoyed a good all-round performance for the hosts, putting Toft in dire straights at 35-5. A solid knock of 57 from opener Ewan Williams and 29 from number 6 David Blackburn began to steer the visitors out of trouble but 3-43 for young spinner Alfie Usher pulled the rug out from under the lower order and left final pair Nigel Muirhead and Daniel Gibbon to survive several close shouts to rescue a losing draw from the situation as the Knutsford side closed on 162-9 to take 7 points to Alderley's 15.

On Sunday Alderley's Third XI fixture against Romiley was washed out without a ball bowled, both teams being awarded 7 points as a result.