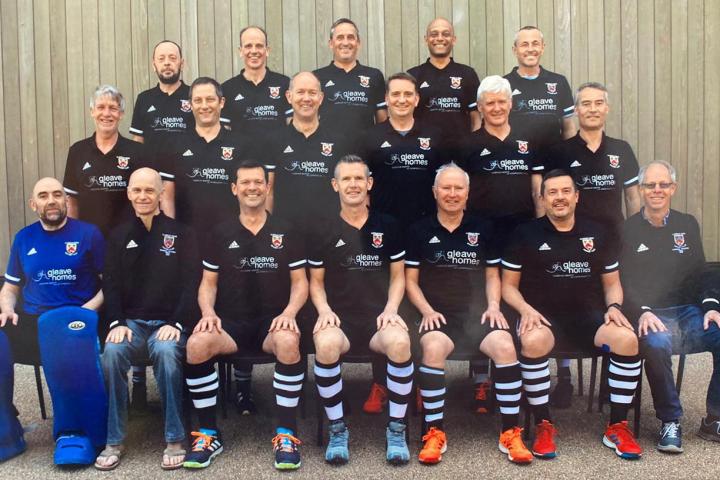 Alderley Edge Hockey Club Men's O50s mens team returned from the Olympic stadium in London as the Men's National Over 50 Champions after beating Chelmsford HC 4-1 in the Final of the competition.

The squad travelled early from Alderley for a 2pm start at the Olympic venue at Lee Valley and the squad contained many of the stalwarts, current and past officers of the club, who have done so much to put Alderley Edge Hockey Club on the national hockey map over the last years.

Special mention to Nigel Baker-Brian who remains a big influence within the club, both coaching across the teams as well as managing the mens 2nd team, on top of this the club are immensely proud of his selection for the England O65 team due to play in the World Cup in Tokyo later this year, and also to John Barnes who after 43 years of playing and unstinting support of AEHC announced that this would be his last competitive game of hockey for the club.

The Alderley team were confident as they had played a fast high tempo game in all the previous rounds and captain Ed Johnson was clear in instructions for this final game, however Alderley started the game in the worst possible way conceding within 3 minutes when a first time strike from the Chelmsford left winger left goal keeper Darren Cooke with no chance.

For the first 15 minutes Alderley struggled to get any rhythm, but slowly the fluidity in the passing returned and gradually the chances started to be created, Alderley were very unlucky when a great shot from Scott Ashdown crashed against the cross bar, however with 5 minutes until half time Alderley got a well deserved equaliser, with Mark Fullerton finishing after a strong run through the centre from Mark D'Souza

With the team a lot more fluid in their play the second half was a much more dominant spell, with the defence of Ed, Nigel supported by Joe Smart, Tim Offer and Paul Buckingham very much in control and restricting Chelmsford to the occasional chance and the midfield including Neil Hanley, Rob Fisher with additional support from Rob Woods and Rich Williams taking more and more control.

However, it was not until the 60th minute that the forward line supplemented by Tom Knight broke through again with Mark Fullerton getting his second with a very well taken goal after a dribble into the D and strike into the corner. Then a few minutes later he added the third for his hat-trick and the man of the match award.

Alderley were now dominant and the management team of Sue Baker-Brian, Paul Dykstra and Nick Rudgard could relax a little, then Phil Benton sealed the victory with a well taken fourth goal from a tight angle after a good team build up to take Alderley to a well deserved and winning 4-1 score line.

A real squad achievement as the team went through 6 rounds beating the likes of Old Georgians, City of York and Wakefield on the way to the final and to gave the club a well deserved national title after so many good cup performances across the whole club this season.

The final action of the season takes place this weekend with the AEHC Under 12 girls representing the North-West in the National finals at Nottingham Hockey Centre where they will be competing with the top 8 clubs in the country and hoping to mirror the O50s achievements.

Alex Constable
Well done , was a fabulous game to watch.

The Alderley boys played great hockey and managed to turn the game around after an early goal by the opposition.

You thoroughly deserved the win.