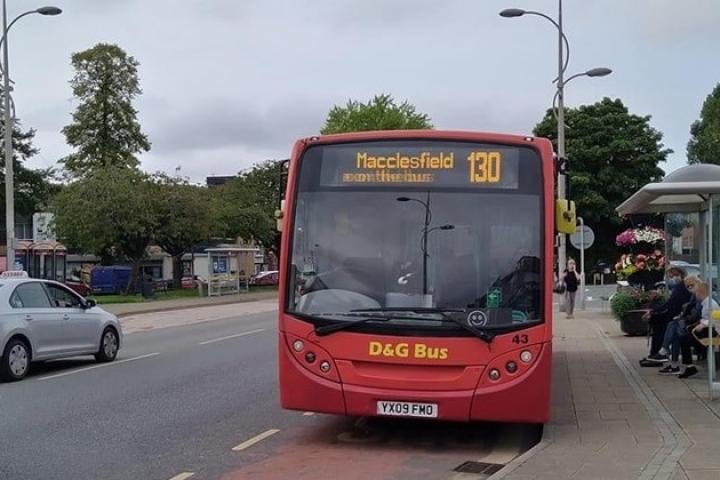 Cheshire East Council has increased the subsidy it provides to keep the 130 bus service running.

The current D&G contract for the service, which runs between Macclesfield and Wythenshawe via Alderley Edge and Handforth, was due to end on 2 April.

D&G buses has been awarded the new contract, going forward, as it provided the 'most competitive bid' for the service.

The contract is for up to five years but will be reviewed annually to assess performance and value for money. The service receives an annual subsidy of £200,000 from the council – up from £75,000 previously.

The 130 route will serve existing stops between Macclesfield bus station and Wythenshawe Interchange, including Alderley Edge, Alderley Park, Wilmslow and Handforth. Buses will run hourly Mondays to Fridays and at a 90-minute frequency on Saturdays.

Councillor Craig Browne, chair of Cheshire East Council's highways and transport committee, said: "This is excellent news for our local communities – not just for bus users but also for local businesses and community facilities, such as for leisure and health.

"The council has increased the subsidy it provides to ensure this important bus route is maintained as part of Cheshire East's public transport network. The council's decision was made in the context of exceptionally challenging circumstances for commercial bus operations, both within the borough and nationwide.

"The return of passengers since the pandemic has been very slow, with current numbers only at about 65 per cent of pre-pandemic levels. This means most services are not financially sustainable in the long term – however, bus services are an essential lifeline for those who rely on them and it is important that we retain them wherever possible.

"At this stage, we have been able to retain this service without affecting any other bus services that are supported by the council. We believe that this support is necessary to retain core bus services for our communities, at least in the short term, to ensure that the fullest recovery from the impacts of the pandemic is made possible."

Simon Carden
So that we may all agree to the sentiment that it is desirable to keep the bus route open ,may I ask how many tendered for the contract ? based on the last three years how many tickets / passengers travelled on the bus per year ? It maybe outstanding value but one could never tell from the article - although I am ready to agree that it is a central plank to a joined up travel network..

Thank you for your queries. I can confirm that Cheshire East Council invited tenders on six different delivery options for the service and received submissions from seven different operators across the different options, with the contract being awarded to the operator with the lowest tender price.

Prior to the pandemic, approximately 175,000 passenger journeys were made on the 130 bus service, although clearly patronage has not yet fully returned to those levels. Across the borough, patronage is still running at only about 70% of pre-pandemic levels, which is why many services are struggling to remain viable.

From the above figures, it can be extrapolated that the new level of subsidy (from 2nd April) will be in the region of £1.63 per passenger journey. Clearly, there is an expectation that this will fall as patronage gradually returns to pre-pandemic levels, whilst the long term challenge is to encourage more people to make bus the transport mode of choice.

On a positive note, the 130 service continues to enjoy the second highest level of patronage compared with other subsidised services across the borough.