Hockey: Mixed success for AEHC 1s at the halfway point of the season 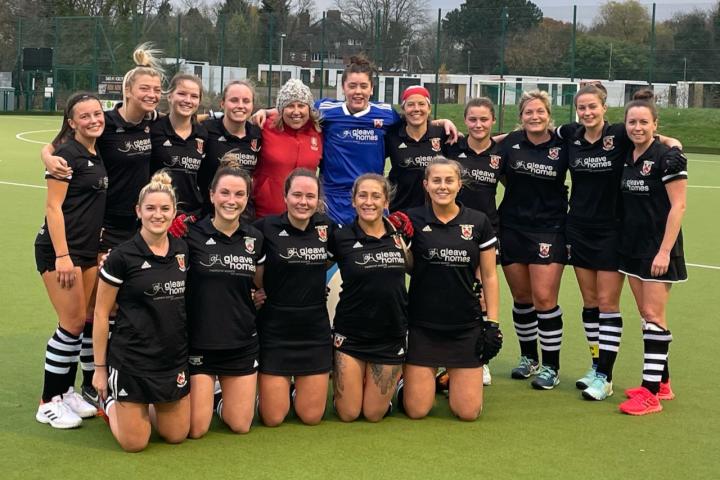 The team have had a busy week discussing tactics, how they were going to play and approach the game .The Ladies were ready to start and work towards earning some much needed points.

The first quarter, intensity was high, with Alderley having most possession, 0-0 at the end of the first quarter a really positive start. In the 2nd quarter Alderley pressed Doncaster high and aggressively and with plenty of penalty corner opportunities, it just seemed a matter of time before the Ladies would score. Half time score 0-0.

In the 3rd quarter, following a Doncaster breakaway, they managed to get the ball to the middle of the D, trapped and scored. A couple of cards in the 3rd quarter saw the score at the end of the quarter 1-0 to Doncaster.

Time was then stopped as one of our umpire's old calf injury had let him down due to the high intensity of the game. Fortunately our Match Official ( and club secretary ) Nick Rudgard was a qualified umpire and stepped up to the challenge of a very intense game!

Our joint Player of the match Lottie Dennett for putting her body on the line (again) during a Doncaster's PCA. End of 3rd quarter, Edge were down 1-0.

Last quarter, Alderley dominated and Lottie Dennett made another fantastic drive to the right shoulder of the D, smashed it off her back foot into the bottom left of the goal. 1-1

Then this was followed quickly when Bex Ward received the ball 5 meters off the goal line, pushed it to her right, and reversed it to the bottom left corner 2-1.

A huge thanks to our spectators today especially Chris and Emma Gleave our sponsors we really appreciate all their support , the other player of the match was Issy Reynolds-Duffy.

Next game is an EH Championship Cup match against Bowdon on 4th December at Kings School 2:00pm PB and then the league returns on February 5th.

The game started fast paced with both sides having good chances to go ahead in the first quarter, but no goals. Edge were enjoying most of the possession and came close through great moves from Ollie Jones , Ben Gregory and Jack Smith.

Belper took the lead just before half-time with a reverse stick shot off a free hit just outside Edge's D, making it 0-1 going into half time after a very even 1st half.

Going into the second half Edge were up for it with good chances down the right and left through Andrew Woody and Scott Brown.

Belper were then scored a well taken goal after a dangerous ball was brought safely down by Ben Whitehead , however he was surrounded by Belper players, and the ball was despatched into the goal.

Edge again were confident going forward but the chances weren't turning into goals. Belper again struck on the counter and a first time slap made it 0-3. Going into the final quarter Edge were down two injuries to Alex Jones and Archie Benton , but kept fighting on to create more chances. Belper were putting some passes together at last and after a move down their right had a pass put into his goal by George. They were then awarded a stroke

The match ended 0-5, a score line not capturing the overall balance of play but reflecting why Belper are top of the league and favourites for promotion, man of the match went to Charlie Lowen for another solid performance at the back

The team now have 2 month break resuming their campaign on February 5th against Timperley.

On the Sunday the junior section of AEHC had a 100% success rate in the England Hockey National Knockout competition as the U18 boys comprehensively beat West Bridgford , not too be out outdone the U14 boys despatched Timperley , the U16 progressing with a bye , the U14 girls took the long trip to Cirencester returning victorious and the U14 girls travelled to Fylde also returning as winners.