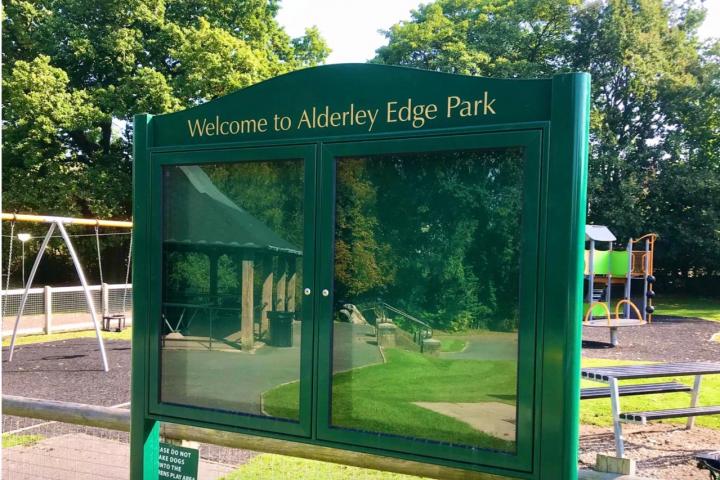 Councillor Craig Browne has been in discussions with officers from ANSA at Cheshire East Council since the summer of 2019 to discuss ideas and aspirations for the village park.

As a result they have produced a masterplan which is intended to show how the park might evolve over the next few years.

Implementation of park masterplan is now underway, including the installation of a new noticeboard earlier today (Tuesday, 22nd September) which the Parish Council purchased.

Councillor Craig Browne said "The masterplan represents a long-term vision for the park, the various aspects of which will be delivered over a number of years as and when resources allow.

"At the end of last year's bowling season, ANSA carried out some improvements to the bowling green and earlier this year installed some pest control fencing, which has helped to protect the playing surface."

Additionally ANSA have placed on order three large planters which should be arriving in early October.

Councillor Browne explained "The planters will be positioned on the triangle in front of the bandstand, pending the introduction of a raised "memorial bed" as a tribute to victims of the pandemic but also as a thank you to all who have helped in the care of others. Once the memorial bed is in place, the planters will be relocated to one of the park entrances."

Following a recent tender process, a franchise for the provision of a mobile refreshment facility in the park, to be located adjacent to the bandstand, has been awarded to La Petite Frog who are locally based and have experience of running a similar facility at South Park in Macclesfield.

Councillor Browne added "I will provide an update when the facility is due to launch, which I hope will be in the near future."

Duncan Herald
The new noticeboard has two opening glass 'doors'.
Which appear to be locked, Unlike the former noticeboard.
What is the proposed procedure for members of the community to have their notices put up?
Also who decides what will/will not be put up?

The new gate to the bowling green's new fence has sadly already been vandalised; CCTV ?