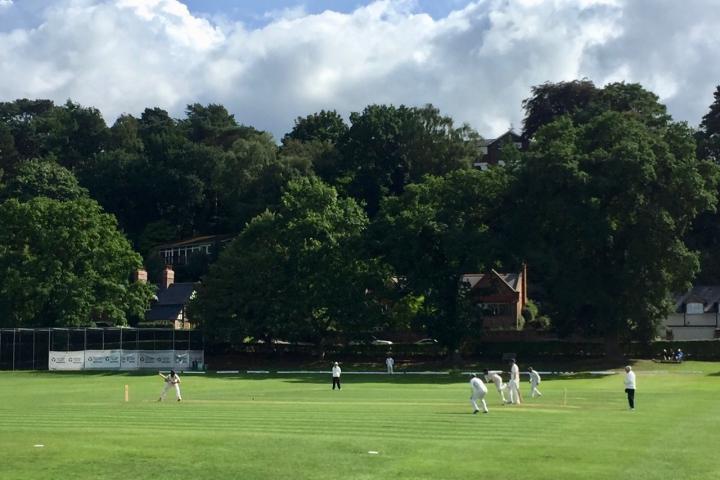 Alderley Edge 1st XI came away with 15 points to Didsbury's 7 from their drawn encounter at Moss Lane on Saturday but rued a missed opportunity to claim another victory to keep alive any challenge for the Cheshire Premier League title.

With a damp pitch and sporadic showers reducing the match to a 33-overs per side match, the visitors, beginning the day in bottom place in the league, won the toss and decided to bowl first on a greenish pitch.

Opener Calum Rowe held the early part of the innings together with a valuable 56 in tricky conditions, handling the seamers well in favourable conditions and regularly attacking the spinners including 4 big hits over the Moss Lane clubhouse.

Rowe fell with the score on 100 and with a solid platform built, Ed Fluck and captain Adam Worrall upped the ante putting on 88 for the 6th wicket at better than a run a ball. Fluck was quickly into his work hitting a flurry of boundaries to put the home side on the front foot and with Worrall manouvering the ball well into the gaps and running strongly the pair helped the home side post a strong total of 188-5.

Both finished unbeaten with Fluck posting 60 from just 40 balls and Worrall accumulating 29 off 33 deliveries, young seamer Taiyyib Khan claimed 2-24 as the pick of the Didsbury attack.

Alderley's Aussie seamer Keiran Elliott struck in the first over of the second innings before a run had been scored and at 31-2 Didsbury were in danger of being swept aside. However, a 116 run partnership for the third wicket between Frederick Kamstra and Nick Anderson swung the game in the favour of the visitors with the asking rate falling below 4 runs per over with ten overs of the innings remaining.

The dismissal of Kamstra, via an excellent running catch in the deep by Elliott off Richard Wilkinson, triggered an extraordinary period of play with Didsbury losing their next 5 wickets for just 17 runs, 3 wickets for 17 runs from a quality 6 over spell from Tom Foreman being the main catalyst. Watching the madness unfold from the other end was Anderson who carried any remaining hopes for the visitors, and in striking 72 from 68 balls, had shown the firepower to still win the game.

With two overs remaining and the pressure building through a resurgent Alderley attack, Anderson tried one big shot too many and holed out to Wilkinson holding a good catch on the long on boundary off Elliot. Despite several close calls the final Didsbury pair survived the remaining 11 deliveries with Alderley unable to secure victory. Elliott finished with 2-18 and Wilkinson 2-32 in a fine effort for the home side.

In the reverse fixture at Wilmslow Road, Jon Usher's Second XI leap-frogged Didsbury in the table after completing an emphatic 110 run victory. A quickfire 30 from opener Dave Wright set the tone for Alderley's innings with number 3 Ollie Pooler providing the mainstay of the innings with an excellent 81.

Solid contributions from the visiting line-up capped off by an unbeaten partnership of 46 between Usher and Dan Fesmer left the home side with an imposing 239-7 to overturn. The Alderley attack ensured that was never a prospect as they ran through Didsbury's order with 11 overs to spare for 129, only Jahangir Hussain's knock of 38 providing any resistance. 3 wickets apiece for Dan Fesmer and Mark Warnes led the attack for the away side.

On Sunday, Alderley's First XI were frustrated by the weather as the re-arranged fixture with Bramhall, moved from the previous weekend due to an invasion of travellers on Bramhall's ground, was washed out without a ball bowled. The weather also accounted for the Third XI fixture at Moss Lane with Grappenhall.

On Monday, the Third XI secured second place in the 3rd XI Sunday Premier Division with a tense win over Oxton on the Wirrall. Oxton made steady progress after winning the toss and batting first, making it to 58 before losing their first wicket. The introduction of spinners Harry Elms and Ashray Bhamidipati changed the course of the game with Oxton regularly losing wickets to the pair after opener Will Clayton was bowled for 57. Skipper Elms finished with 5-33 and Bhamidipati 5-44 to dismiss the hosts for 146.

Joey Chong helped Alderley start their reply with a flourish striking 49 off 51 balls but a mini-collapse let Oxton back into the game. Elms and Bhamidipati combined again, this time with the bat, adding a crucial 45 run partnership for the 6th wicket to steady the innings. 3 quick wickets fell with Alderley needing just 8 runs for victory but Bhamidipati remained composed in the pressure situation to guide the visitors to victory by two wickets.

Johnny Scurrah
I have to say that I only played in the game at the weekend versus Macc because my hero Andrew “Freddie” Flintoff was playing. I was going to the football with my boyfriend but heard Fred was selected with his son and decided that I could miss out on playing with such a legend of the game.. He wasn’t impressed with my bowling though which was really disappointing to hear!
It was a great pleasure to grace the field with him though and can’t wait till next season to see when he plays again so I can try and play in that game too..
Thanks Freddie.
Jonny Scurrah
AECC 2Xl All rounder