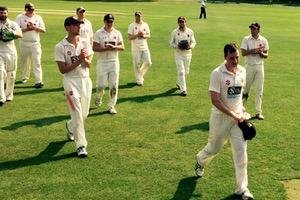 Put into bat, Neston could never come to terms with the movement achieved by Alderley's seamers, and all-rounder Richard Wilkinson led the attack with an outstanding spell of 18 overs 5 for 35 as Neston collapsed to 106 all out.

Wilkinson then hit the winning runs in a quick-fire 27 not out after Calum Rowe had top-score with 40, giving Alderley a 7 wicket victory after barely more than 20 overs of their innings.

It was an excellent day for the club with the 2nd XI chalking up their 4th successive victory, banishing all fears of relegation and moving them into the top half of the table. Alderley managed to dismiss Neston's last man in the final over as darkness fell and storm clouds gathered, Dan Fesmer's 6 wickets completing a win set up by important contributions with the bat in the first innings by Dave Leonard and James Scott.