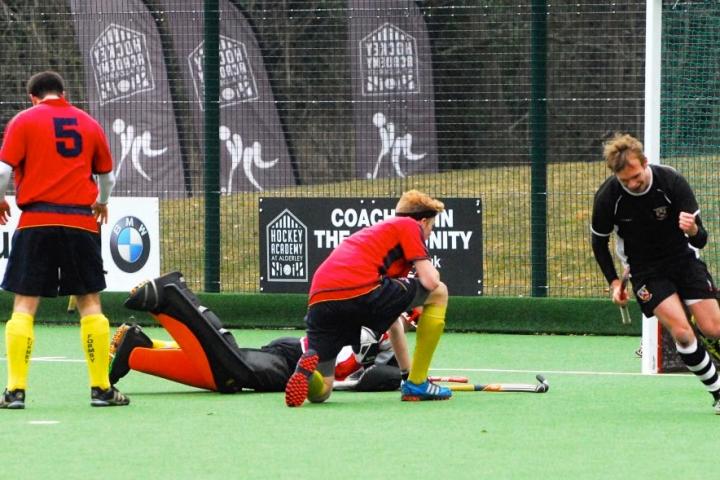 Alderley Edge Men's 1st team faced Leeds in the North Premier, with the visitors looking for a win to potentially top the table and were on a 5 game winning streak.

The game started with Leeds on top and they quickly won a penalty corner, which was saved, they kept the pressure on the home defence and were looking dangerous. However, as soon as Alderley started to pass the ball around they soon broke into the Leeds circle, Warburton collected a fine through ball and crossed for Sam Gregory to convert from close range.

Leeds soon equalised when their player ran the perimeter of the D before getting a reverse stick shot in that was squeezed into the turf and ballooned into the net.

Alderley on the back of a good performance last week, kept their composure and were soon back in front when a fine run by Matt Cresey down the left drew several Leeds tacklers before linking with the Gregory who set up Warburton for a tidy finish over the 'keeper.

Alderley were starting to dominate and the Leeds 'keeper and defenders were called into action as several chances came and went. Leeds then mounted an attack, but great determination from Ben Whitehead saw him win the ball on the edge of the Alderley D. He calmly found Kay whose simple pass picked out McCormick, he found a gap in the Leeds midfield to release Sam Gregory up the right hand side as he went past the his marker he passed to his brother Ben in an advanced position. He held off the last defender before returning the ball back to Sam, who finished well finding a gap between the 'keepers pads for a great team goal.

The second half started well for Alderley as Adam Wildig was set free and as he entered the D he hit a rising shot into the near top corner that was too strong for the 'keeper. Leeds began to show why they are challenging at the top of the table and fought back and started to create chances, having a couple of corners saved and creating pressure around the circle.

They were then awarded a penalty stroke, which was scored. On their next attack Riley was forced into a great save to maintain the two goal lead. That lead soon became three as once again tidy passing in the midfield through Parr and Sanders allowed Sam Gregory the chance to test the Leeds back line. He drove the ball into the D before completing his hat-trick with a fine reverse stick strike.

Wildig had another couple of chances saved as the attacks went from end to end, Leeds grabbed one back when the attacker got the wrong side of the Alderley defence and scored. They almost grabbed another but the effort was saved, before Mattingly and Sawas saw out the last few moments with composed play and timely clearances. Final score 5-3, the win jumps Alderley up the league and well clear of the danger zone.

The seconds were trying to inflict a first defeat on table topping Didsbury Northern, but found their hosts too hot to handle as good passing and tidy corner routines saw them lose 7-1, with the consolation goal coming from Joe Gregory's goal bound effort which may have been over the line before Oli Wildig made sure.

The 3s also playing the league leaders in Sale, were drawing 1-1, until they had three players sent to the side lines in one go. They conceded two quick goals and when back up to 10 they created enough chances through Walker and Baker to grab at least a point, but left empty handed.

The fourth team hosted the division's top team Deeside Ramblers, with a chance of going above them, and the game showed how closely matched they are finishing 2-2.

The 5s turned around a run of three defeats to go back to the top of the table defeating previous leaders Chester 4-2, with Alston getting two from penalty corners and Allenby and Kennon the other scorers and Martin Webb having a good game in goal.

The sixth string had a good local derby with Macclesfield, ending 2-2.

The 7s moved up to second place replaced hosts Triton after winning 2-1, with Greg Johnson grabbing both goals.