Hockey: Alderley fight back for a vital point 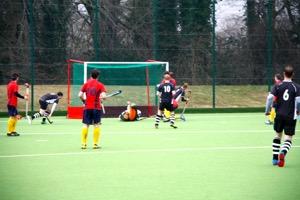 Alderley Edge travelled to North Premier bottom side Ben Rhydding looking for a win to reignite their season. Things did not start well, when within the first couple of minutes static defending and slack marking allowed the hosts to attack the baseline before crossing for the simplest of finishes.

However, it was not long before Alderley were back on level terms, as good interplay between Ben Gregory and Ciaran Sanders gave Sam Gregory the chance to deflect in for the equaliser.

Alderley had the majority of possession, but did not make the most of it creating half chances, but Ben Rhydding were looking to counter attack at pace and it was them who had the most shots on goal. Riley did well to keep out a penalty corner, but could do little about the goal that gave Rhydding the lead when the forward produced an impressive finish high into the roof of the net from a tight angle.

Alderley were still looking better of late going forward and tidy link up play gave Kieren Hall the opportunity to shoot and his flicked finish was too strong for the keeper. Before the break Rhydding again went in front, as the forward did well in the D showing composure to hold off challenges before finishing well.

The second half was similar with Alderley having more of the ball but Rhydding have more clear chances.

Simon Parr repeated his skill of last week cutting inside the home defence, before this time smashing in a shot that gave the keeper little chance. Unforturnately for Alderley parity did not last long and a break down the left gave the striker the chance to shoot reverse stick and he found the far corner of the goal.

The game became more frenetic and Ben Gregory was sin-binned, but Alderley held firm, both teams had penalty corner chances but failed to take advantage.

When back to full strength Alderley pushed the home side back and eventually the pressure told as James Warburton found a finish from a tight angle putting the ball high into the net.

There was still time for Rhydding to have another corner chance following Wildig's sin-binning for a technical offence, which was saved and they had the ball in the net, but it was ruled out for an infringement prior.

Then with only moments remaining Alderley had only their second penalty corner of game. The routine didn't quite work as McCormick's effort was charged down. Final score 4-4.

It was better news for the second team who played a physically strong West Derby side and ran out 5-2 winners with Joe Coxon, Chris Cook, Chris Hardy, Oli Wildig and Ben Badger all getting on the score sheet. A result that sees them up into third place in the league.

The other teams were affected by regional honours for some of the younger players including 'keeper Ted Heywood and midfielder Alex Jones. Alderley Edge are looking for more goalkeepers, with kit and training provided.

The fourth team lost pace with the top of the table after being held to an entertaining 3-3 draw by Sale 2s.

The fifth team are still top of the league despite losing their first game of the season 4-3 to Bebington.

The 7s kept up their impressive form with a 3-1 win over a decent Lymm side, Jed Hassid, John Barnes and Sean Neary with the goals.