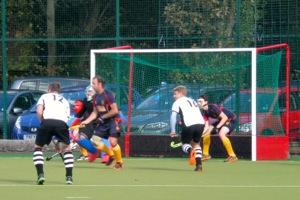 Alderley Edge Hockey Club Men's first team travelled to Formby in the sort of game that they need to be getting results from to strengthen their position in the North Premier division.

Formby started brighter putting pressure on Alderley, but as in previous weeks Alderley held firm and allowed no chances. It was Alderley who could have taken the lead when a breakaway lead to Warburton picking out Coxon, but he pulled his shot wide of the target.

There was little between the teams throughout the half and it was scoreless at the break.

Alderley were beginning to find space through the running of the returning Sam Gregory, and created a couple of half chances early in second half.

Formby fought back and Alderley did well to defend free hits around the D and a sustained period of pressure that included a good save from a penalty corner by Riley and solid tackling from Whitehead. Just as Alderley looked like they had weathered the storm they cheaply turned over possession near their own goal and despite the initial effort being saved the rebound was tucked away. It was soon two as Alderley switched off in midfield and Formby got players forward and made the most of the opportunity and scored again.

This seemed to spark some life into Alderley and they became more of threat forcing the opposition 'keeper into action and winning penalty corners. From the first corner McCormick fired home to make it 2-1 and when Wildig's effort hit a defender on the line Alderley had a chance to draw level. James Warbuton made no mistake from the spot.

As Alderley looked like they had got out of jail, they were forced on to the back foot and Formby won a penalty corner of their own which was converted. As the game began to have a bit of an edge Alderley turned the ball over in the left back area and the Formby forward bore down on goal before crossing where a sliding team mate forced the ball over the line.

The action was not over as Alderley went up the other end and won another penalty corner and Ben Whitehead fired home. After protests by the Formby players the umpires conferred and even though no further information was given, the goal was then disallowed. Alderley were aggrieved and fought hard in a fractious ending but were unable to add to the score.

The second team came up against a fit and fast Lancaster 1s, and in an enthralling encounter it was the Cumbrians who ran out 5-3 winners. The ever reliable Chris Hardy scored two from penalty corners and Andrew Wood fired home the other.

The third team had arguably the performance of the weekend, up against a strong looking Timperley second team away from home, they put together an excellent performance to win convincingly 4-0.

The 4s weren't expecting to get too much out of a fixture against a Neston 4s side that had won their opening matches 9-0 and 7-0. After 25 minutes, they were 2-0 down and distinctly the second best team. However a hat-trick from man of the match Louis Godfrey before half time smashed Neston's confidence and two goals from Thomas Jefferis and Jake Rothwell in the second half made the 5-2 final score look easy against one of the best teams in the league. Alex Jones at right half showed why he has been selected for the North of England U16s with a faultless performance and Ben Hodkinson was outstanding in an unfamilar holding role. If they can produce the same level of performance week in, week out, they will be real contenders for promotion.

The 5s headed west to Wales without a 'keeper, to face a very strong Denbigh side, who just missed out on promotion last year. With a squad of 12 , containing 9 teenagers they played some terrific attacking hockey and were dogged in defence. It was a hard fought victory . Alderley coming out 4-2 winners . A great solo effort from Fin Allenby, a team move and great finish from Callum Stewart, then two goals from well worked short corners from Harry Bateman and Sam Carroll . A man of the match performance from Chris Everett as a makeshift keeper kept Alderley in the game and included a couple of truly outstanding saves . The Denbigh side are a feisty bunch and received a straight red card for violent conduct. So leaving with all three points was well received by the Alderley squad.

The sixth team suffered by not having a goalkeeper and lost 9-0. They would welcome someone willing to put on the pads. Full kit and training would be provided.

The 7s with a mixture of youth and experience put in another sterling performance and racked up a whopping 7-0 win.