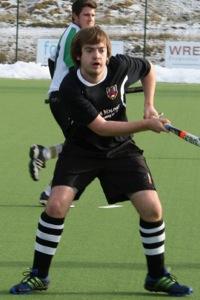 Alderley Edge Mens' s 1st team were back in North Hockey Premier League action and had the short trip to title chasing Timperley.

Alderley were looking to build on last week's 5-0 friendly win and in a competitive game throughout it was Alderley that started the brighter forcing Timperley onto the back foot. They thought they had won a stroke as James Warburton's goal bound effort struck a defender, but a corner rather than a stroke was awarded and Timperley kept out Jackson's effort.

As the half drew on Timperley began to create chances squandering a one on one with the 'keeper before breaking the deadlock when a shot from the edge of the D took a deflection off an Alderley defender on the way in. James Riley continued to be the busier of the keepers and ensured it stayed one nil with a fine diving stick save to prevent Timperley's Polish international scoring from a penalty corner routine.

As the half drew on the game evened out and Alderley were frequently breaking the Timperley back line but were unable to make the most of their chances.

The second half was similar with both teams defending well and looking to break forward at every opportunity. Kay was winning many important challenges and Hughes kept the Timperley midfield quiet. Mattingly was finding the attackers more regularly and Badger was able to keep attacks going forward from the left, it was this channel that brought Alderley their equaliser. As Ben Gregory drew the defence and slipped the ball to brother Sam and he picked out Warburton's run and he produced a tidy deflected finish into the roof of the net.

Alderley repeatedly broke up Timperley play and had success out wide and Simon Parr was denied giving Alderley the lead by a fine save. Timperley were still trying to press and were committing players forward and a piece of sustained pressure in the corner with only four minutes remaining, when play quickly switched sides a Timperley defender worked the ball onto his reverse stick and fired his shot just inside the post.

It looked as if Alderley's poor luck from 2013 had continued, but they launched a final attack and following a quick free hit Timperley found themselves caught short at the back and as the ball became loose in the D Frankie Bryant was first to react and he hit a reverse stick shot first time and into the bottom corner for a deserved equaliser, there was only just time to restart before the final whistle sounded.

Both teams will see it as two points dropped, with Alderley showing great spirit and a point was the least they deserved for a professional performance.

The 2s played North 2 leaders City of Manchester who boasted a 100% record after 12 games. It was a close hard fought encounter that Manchester edged 3-2, but it was the toughest test they had faced all year and it could have been better for Alderley if they had their full strength squad and had taken all their chances that included a penalty stroke. Laurence Barnes and Chris Hardy were on the score sheet for Alderley.

The third team's fantastic season continued with a battling 3-2 win away at Timperley, Rob Marks with two goals and one from Josh Towne keeps their lead at the top of the table at seven points.

The 4s moved into top spot after winning 5-2 against fourth placed Sale, the goals coming from James Ireland (2), Oli Kennon (2) and Jon Talbot.

The 5th string closed the gap to second placed Bowdon to just one point after comprehensively beating them 4-1 the scorers were Roland Alston with a hat-trick and Finn Allenby.

The 6th team secured local bragging rights after the short journey to Macclesfield and coming away with a 6-0 victory.

The Men's seventh team was a fruitful one as they secured a 5-3 victory.