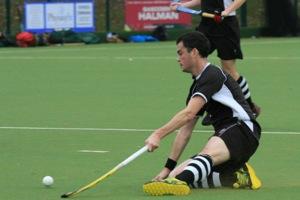 Alderley Edge Men's first team travelled to promotion chasing Preston in North Hockey's Premier Division. After suffering narrow defeats in their last couple of games Alderley were looking to pull off a surprise win and start their climb up the table.

Alderley started brightly with the midfield of Bryant, Joe Gregory and Ben Whitehead winning the battle in the centre of the pitch and it wasn't long before Alderley opened the scoring. Good pressure up front lead to a poor pass and Joe Coxon won a 50:50 challenge on the 25 yard line. He played in Sam Gregory who found James Warburton and he in turn fired the ball towards the back post where Coxon had arrived to tip in.

It was 2-0 when a swift breakaway lead to Warburton picking the pass in the D for Adam Wildig to deflect home.

Preston had attacks of their own but squandered opportunities and missed penalty corner chances with Alderley standing strong in defence.

Before half time Alderley converted another chance, when following up a clearance from an Alderley penalty corner the ball came to Nathan Hodgson, making his debut, and he fired the ball back into the D and perfectly picked out Warburton to make it 3-0.

The second half was a very different affair, Preston upping the work rate and pressing hard all over the pitch. Their increased effort was rewarded with a back post tap-in.

Alderley looked to have outsmarted their hosts when almost immediately a long ball from Mattingly found Sam Gregory in space he headed for the D and slipped the ball to Warburton to make it 4-1.

However, Preston kept up the pressure and although Alderley defended resolutely and kept springing counter attacks it was small errors that let Preston back in. First an unnecessary challenge outside the D lead to a penalty corner which was converted for 4-2. Then a cross was allowed into the D creating another overload and a simple finish for 4-3. A verbal disagreement with the Umpire lead to a penalty corner being awarded and duly scored from, then losing possession in the middle of the pitch allowed a run and finish from the Preston's key player for 4-5.

Alderley's heads could have gone down but instead they gathered themselves and won a penalty corner of their own and a slick routine ended with Mattingly deflecting in the equaliser with only three minutes to go. However, there was to be no happy ending as Alderley lost concentration and Preston managed to manufacture have a clear sight of goal and the chance was expertly taken to give the hosts a thrilling 6-5 victory.

Alderley next host Ben Rhydding and will look to take the positives from a enthralling match and will have extra players to call upon.

The second team leaped up the North Division Two table including going above opponents Winnington Park first team with a resounding victory. Park had no answer to Alderley's short corner routine as Chris Hardy fired in 5. His brother Matt made it a good day all round with two goals from open play and was joined on the score sheet by James Warburton and Oli Wildig. Final score 9-1.

The 3s made it 9 wins and 1 draw for the season, beating Winnington Park 2's by four goals to one. Andy Walker grabbed a hat-trick and junior product Chris Ashton with the other.

The 4s fell foul of the weather. The 5th team went down 2-1 to Brooklands. The sixth team beat Knutsford 3-0 and the 7s success story continues with a 4-1 victory over Timperley. Alderley EdgeHC are looking for goalkeepers old or new as on numerous occasions they have fielded teams with no recognised 'keeper. Kit and Coaching is available from the club.

Photo: James Warburton - who had a hand in all Alderley Edge's goals.