Draft Core Strategy set to be approved for consultation 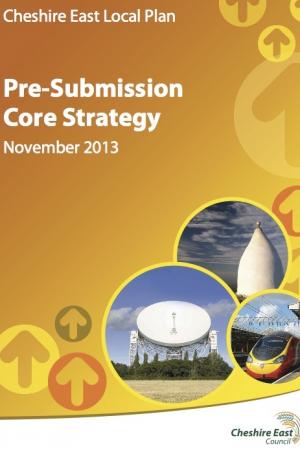 The draft Core Strategy document, which represents the next stage of the Local Plan, is expected to be approved this week ahead of the last public consultation before the Council publishes the version of the document it will submit to the Secretary of State.

The Cabinet Member for Strategic Communities will consider the Pre-Submission Core Strategy at a meeting on Friday, 1st November, before the public consultation on the next stage in the production of a Core Strategy starts on November 5th.

Cllr David Brown said "It is three years since the consultations began on the Local Plan. So far we have received about 28,000 responses from members of the public about our draft proposals. This is an unprecedented amount of interest in a document that will be the blueprint for Cheshire East to the year 2030. The Local Plan is a keystone for the future of the area and supports our number one priority – Jobs Led Growth. The plan has been developed to support the generation of jobs focused around the M6 corridor but also ensures that the character of Cheshire East is retained.

"In September, I unveiled provisional strategic sites for potential inclusion in the emerging Local Plan Core Strategy. These sites, together with the plan's evidence base and proposed new infrastructure have been incorporated into this document which will now be subject to public consultation between 5th November and 16th December 2013.

"We had a tremendous response when we presented these sites to our Strategic Planning Board in September with around 30 people and groups coming along to speak at the meeting. There were some excellent and constructive points made and it's only right that we respect the effort people put in by now making extra time to reflect on them properly.

"Following this final round of consultation, we will publish the Core Strategy, inviting formal representations – and then submit those comments along with the document to the Secretary of State who will ask that the Core Strategy is examined by the Planning Inspectorate."

Provisional strategic sites in the draft document include:

Safeguarded Land has also been identified in the draft Core Strategy that may be required to meet longer-term development needs stretching well beyond the period of the Local Plan.

One of the safeguarded sites is 26 hectares of land adjacent to the North Cheshire Growth Village in Handforth East.

Others include 26 hectares of Safeguarded Land off Prestbury Road, Wilmslow and 14 hectares off Upcast Lane, Wilmslow which would both require an adjustment to the Green Belt boundary.

The draft version of the Core Strategy will be discussed at a meeting with Cllr David Brown, Deputy Leader of CEC and Cabinet Member for Strategic Communities. The meeting will be held at Westfields on Friday, 1st November, starting at 12 noon. A copy of the Pre-Submission Core Strategy, which is expected to be approved for public consultation, is available to view on the Cheshire East Council website.