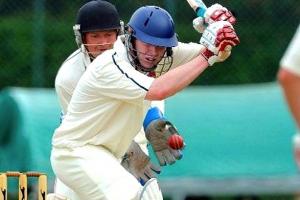 Alderley Edge 1st XI picked up another vital 25 points on Saturday with a convincing win over local rivals Macclesfield. Asked to bat first on a pitch which offered prodigious movement for seam bowlers, Alderley's batsmen applied themselves well and amassed a total of 203 for 6 from 55 overs. Jon Steele led the way with 52, with good support from Jason Whittaker (44 not out) and Alan Day (34).

For Whittaker, this was only a prelude to the main event, for when he took the ball after tea, he proved almost unplayable and returned the outstanding figures of 19.2 overs, 7 wickets for 38 runs. Macclesfield's innings ended on 135 all out, giving Alderley a 68 run victory.

The 2nd XI match at Macclesfield was a very close affair with all results still possible in the last over. In reply to Alderley's 221, with Jon Usher and Ollie Wildig both making half centuries. Macclesfield finished on 219 for 8, making for a very exciting drawn match, with Alderley collecting a useful 15 points.

Earlier in the week both teams progressed to the next stages of the T20 knock-out competitions, the 2nd XI with a comfortable win at Congleton and the 1st XI pulling off an amazing victory against Brooklands, recovering from 26 for 5 to overhaul the visitors' 138 thanks to dashing contributions from Ollie Wildig, Ollie Hall, Tom Sibley and Marc Chan.